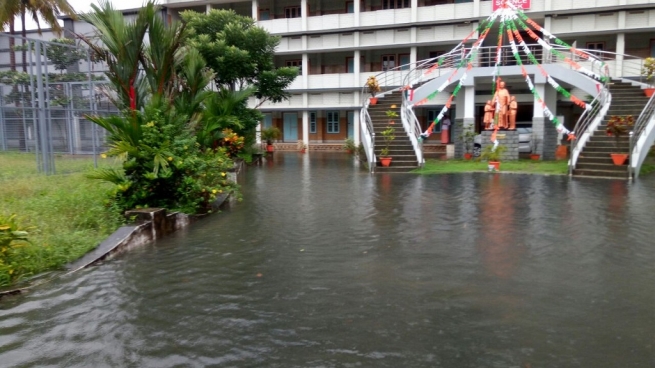 (ANS – Thiruvananthapuram) – Flash floods in Kerala have killed 87 people and displaced around 36,000 according to Indian officials, after heavy monsoons led to landslides and overflowing reservoirs across the southern state. Also the Salesians institutions in central Kerala are flooded. “We are unable to do anything due to incessant rain” the Salesians working there say.

Kerala, famed for its pristine palm-lined beaches and tea plantations, is battered by the monsoon every year but the rains have been particularly severe this season.

An incessant downpour battered Kerala again on Wednesday, resulting in 28 more deaths and more destruction and forcing authorities to issue a red alert across the southern state. With these deaths on Wednesday, including five of a family, the death toll since August 8 climbed to 67.

While a red alert was sounded in 11 of the 14 Kerala districts, including Idukki, Kozhikode, Wayanad, Malappuram, Pathanamthitta, Kannur and Ernakulam, by Wednesday afternoon, it was extended across the state by the evening hours.

Cochin airport was shut till Saturday after water flooded the complex and the state government declared a holiday on Thursday in all educational institutions.

As for the Salesians, at least three institutions have been hit by the floods: the center of Angamali, Irinjalakuda and Mannuthy Thrissur. Malabar region is affected by landslides.

Communications in the area are still difficult and it is not excluded that other works may be involved.

“Many people are now perched on terraces as hours up to first storey are flooded and water level is still rising. The biggest problem is no power supply in many flooded areas, with mobile phones running low on batteries,” said Raju Abraham, local CPI-M legislator.

The heaviest rains and floods since 1924 have caused massive destruction, leaving more than 75,000 people in relief camps and damage to crops and properties that the state estimated to be over Rs 8,000 crore.