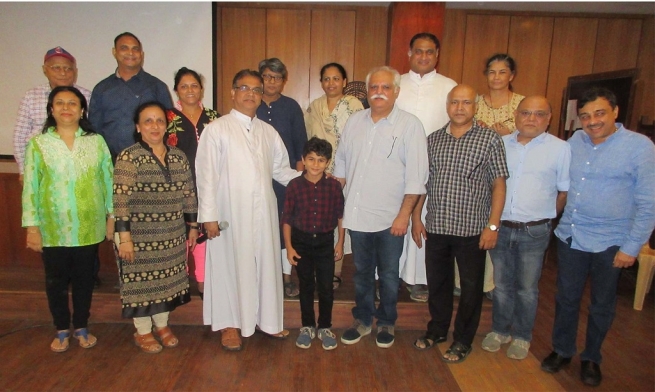 (ANS – Mumbai) – Students and alumni from “Don Bosco High School” in Matunga are known worldwide for their creativity and excellence in a range of fields. This creativity came to the fore on August 4, when the teaching and non-teaching staff of the institution attended a special screening of the feature film “5 Rupya”, which featured current and past pupils of the institution in starring roles.

By Susan Philip and Ashwini Gupte

The film's production team and the young actor Yohan were present at the screening. The film, an adaptation of the classic short story, “Idgah” by Munshi Premchand, provided a telling take on the fact that children, despite the subterfuge, are good at heart.

The film is a poignant narrative of the bonding between Ameena, a grandmother, and Hamid, her grandson and an orphan. Ameena, played by Shabana Azmi, is the quintessential grandma, fiercely proud of her grandson and willing to sacrifice all for his sake.

Little Hamid, played by the young Boscoite Yohan Panjuani, is extremely affable, with his complete trust in Ameena, deferentially tagging along with a bunch of older boys, and especially his sense of wonderment when observing the simple beauty of nature.

A loving relationship with God is a recurrent theme throughout the movie. The joyful celebration of Eid, offering of Namaaz, and even Ameena’s explanation to little Hamid that his father would return after completing the all-important work that he had been called to do by God, emphasises the theme.

Set against the backdrop of the valley and the season of Eid, the movie unfolds with Ameena cooking over an earthen stove and getting her fingers singed, a fact noticed by Hamid. The two live in abject poverty, but Hamid is an optimistic, precocious and lively Kashmiri lad being promised “5 Rupya” by his grandmother as his “Eidee”.

He looks forward to eidee and the scenes encapsulate the consequences of Hamid helping himself to the said coin. The movie captures the escapades Hamid has with the village boys, his unwavering faith in what his grandmother tells him about his parents and the will that he exerts to avoid the temptation to buy the frills offered at the fair.

A powerful message about the purity and innocence of little children came through when Hamid, little knowing the upheaval he has created as a result of purloining the coin, returns happily from his first ever visit to the fair. He brings a gift, the only thing he has spent his money on, despite a multitude of juvenile allurements.

Be it the puckish look or the myriad emotions that flit by Hamid’s face, the camera does not disappoint. It captures them all. The musical score, the lyrics by Javed Akhtar, add gravitas to the film.

Shabana Azmi and Yohan Panjuani stole the hearts of all with their stellar performances. Premchand came to Mumbai once, lured by the idea of writing stories for the silver screen, but went away disappointed. Today, if he were among the audience, watching Piyush Panjuani’s “5 Rupya”, the samrat would have nodded in approval.

“How much more Don Bosco can it get!” Piyush gushed. The Rector, Father Crispino D’Souza, who was a part of the audience viewing the film, remarked, “I became emotional towards the end of the film because it reminded me of a similar incident in my life where my mother corrected me and that bore a deep impression on me.”

The Principal, Father Bernard Fernandes, thanked the producer/director and his team, and the parents of Yohan Panjuani who were present in the audience, for their touching gesture in remembering the Don Bosco staff for a special screening of the film before its release.

Having been allowed to relay the film at Don Bosco Matunga, Piyush said, “Father, it’s an absolute honour for me. I was a small kid walking and running around in Don Bosco and then to have my film screened is an emotional moment. You’ve made it happen. Thank you so very much!”