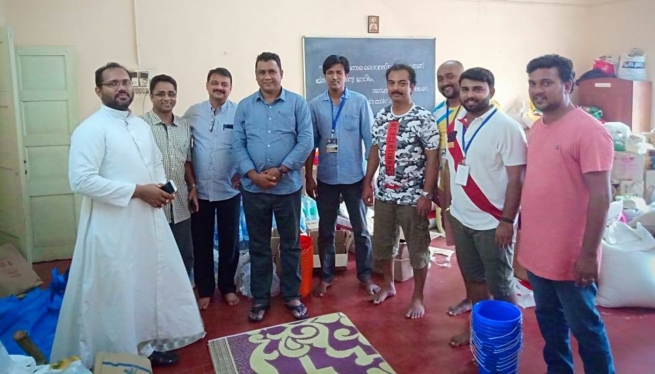 (ANS – Bangalore) - Update - Don Bosco Vaduthala has opened relief camp at Don Bosco School and Youth Centre for the people affected by floods in Ernakulam, Kerala. There are 5970 people from 1419 families who have registered in this camp as of now. Don Bosco, along with the government, local people and NGOs collected water, food, clothes, medicines and emergency articles and distributed to the people. Medical checkups were organized to prevent epidemics and for emergency health needs of the affected people

Don Bosco Vennala cultural centre opened its doors to organize relief camps for people affected by floods in Kerala. There are 250 people staying with Don Bosco. Medical checkups were organized at the centre in collaboration with Ernakulam Medical Centre. The local MLA also visited the centre. The Don Bosco Vennala team also visited 6 relief camps including worst affected Chenganoor and reached out to more than 500 people with food, water and clothes.

Don Bosco FCDP Kollam along with 15 fishermen and staff went to the relief camps at Chengannur, Kuttanad, Edathuva, Mariapuaram and Ambalapuzha and distributed water, food, medicine, clothes and bed sheets. They carried a boat on a lorry and after reaching the affected areas, they used the boat to reach the victims. These camps were seriously affected as they were surrounded by water. In two days, the team reached out to more than 4000 affected persons.

Don Bosco Trivandrum Veedu Society, Trivandrum chose an Island named Manrothuruthu in Kollam district for the relief work. It is an Island surrounded by the Ashtamudi Backwaters. More than 60,000 people were affected by the flood they have lost their houses and everything they owned. There are 12 flood relief camps in Manrothuruthu and East Kallada. Each camp has more than 350 families.  Don Bosco Trivandrum bought and collected clothes and sleeping kits and distributed to more than3000 affected people. The relief works are continuing and expected to reach more people in the coming days. DBV Trivandrum hasalso formed youth volunteer support groupsto clean the dirty houses to make livable when the people return to their homes.

Officials estimate that more than 2, 50,000 people, including the aged and the infirm and women and children are evacuated from Kuttanad in Alappuzha district. Don Bosco Alappuzha concentrated its relief works in Kavalam and Muttar where large number of people lodged in relief camps. DB Alapuzha collected and purchased clothes, mats and bed sheets and distributed to more than3000 people

Near to Don Bosco there is a place called Pope Nagar, a hilly area. Government evacuated all the families from there during the night as a precaution to prevent casualties of unexpected landslides. Don Bosco Mannuthy Bhavan has opened its doors and used the school as a night shelter for 200 families(800+ people) and provided food, toiletries and sleeping kits (bed sheet, mat, blanket and one pillow). DB Mannuthy Bhavan also provided sleeping kits to other affected people lodged in the relief camps nearby.

Don Bosco Irinjalikuda started a relief camp at their school accommodated 153 affected families (703 people). Medical camps were organized for the people, distributed clothes and foods. Later 95 families were safely returned to their homes after the water receded.

Don Bosco Mampetta has reached the relief camps opened in Kozhikode district and distributed food and cloths. More than 1500 people reached through the relief works. Another 50 families who are severely affected due to flood and landslide were supported with one week groceries and provisions.

There are thirteen relief camps in the KeezhmadPanchayat, where the flood-affected are being sheltered. Don Bosco Aluva is in direct contact with two relief camps– Keezhmad ORBIK and Keezhmad UP School, visited the relief camps frequently with one doctor and nursing assistant and offered medical aid to the affected people. There are 750 people housed in both these camps together. The Salesian brothers are actively involving relief works in these camps. The members of Don Bosco Youth Centre has swung into action to bring reliefs to the people who are suffering by collecting and distributing food, medicines, cloths and other emergency materials.

With the help of the students of Don Bosco College, visited the affected families provided counseling and moral support to the depressed women and children. They also collected and distributed food, clothes and other emergency materials for more than 100 families. DBS is planning to support the affected families to rebuild their sanitary and drinking water facilities.

Don Bosco College along with the students visited the affected families, provided counseling services for the depressed people and coordinates the relief works in different relief camps. They also started the cleaning of the dirty houses, public places and neighbourhood areas.

In order to help build back the affected areas BREADS plan to initiate a #RebuildKerala campaign where we will extensively use the  human resources of Don Bosco Institutions  to clean up houses, public institutions and neighbourhood areas. All Don Bosco formation houses (Seminarians), colleges and high schools are ready and willing to help their services. We are in the process of forming volunteer groups of youth, students and staff of Don Bosco institutions and youth centres for this #RebuildKerala venture.