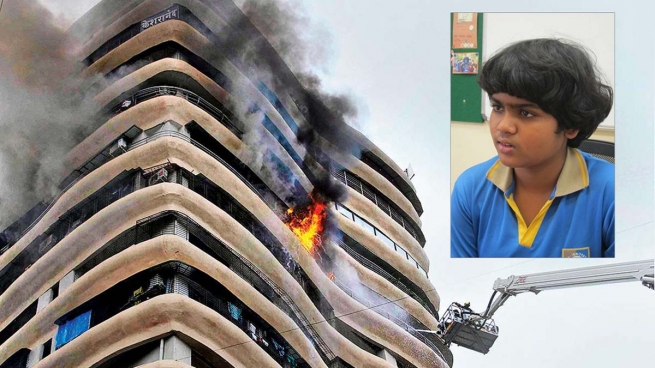 The smoke entered her bedroom, why her parents led her and the other family members into the kitchen where they opened the window in search of clean air to breathe. But they found nothing but smoke.

A major fire broke out on the twelfth floor of the building, killing four of their neighbors. A call for aid was soon made and in a few minutes the sound of the sirens of the fire brigade was heard. However, it soon became clear that rescuers, on their own, could not help all the people trapped inside the building. Who would help them? When? How?

A great help came from an unexpected person! The young Sadavarte did not hesitate to come forward. The girl tore her clothes into small pieces and then wet them with water, as a sort of air purifier to be placed on one's nose to filter the carbon. Then she urged those who were trapped to do the same and told them to put a damp cloth on their bodies to keep the temperature low. Her instructions worked and earned them precious extra time, while the firefighters carried out the rescue.

Two years earlier, at school, Sadavarte had carried out a research on disaster management. She had learned a lot about fires and how to deal with dangerous situations.

At that time, across the globe, many catastrophes had occurred, such as the tsunami in Japan or Hurricane Katrina in the United States. For this reason, Sadavarte had asked her teacher how to behave in such cases. "Why don't you do a research and explain to all of us what to do in the event of a disaster?", the teacher replied.

The girl did her research and her study and her ability to stay calm helped to save her family and her neighbors from the fire. With her technique, she won them valuable time, until the fire brigade personnel brought everyone to safety. Her parents and the school - where Sadavarte learned the rescue techniques - are extremely proud of Zen Sadavarte.

"When such things happen, you feel proud, because you know it's the result of the work you do in the school, along with all the staff," said the rector of the school, Fr Crispino D'Souza.