Ireland - Salesian presence at the World Meeting of Families 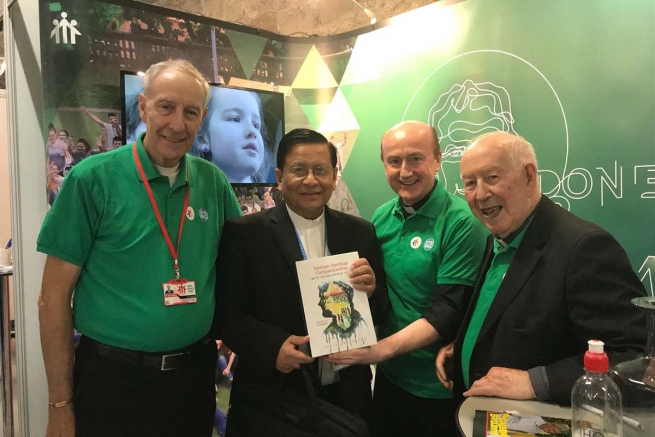 (ANS - Dublin) - The World Meeting of Families takes place every three years, ever since 1994. The last meeting was held three years ago in Philadelphia and, on that occasion, Pope Francis announced that the next one would take place in Dublin. Here, from 21 to 26 August 2018, a record number of families took part in the event and participated in the numerous workshops, round tables, activities and debates that were organized.

The Salesian Family also took part in the World Meeting of Families in Dublin. In fact, the Salesian stand attracted a large number of visitors among the participants of the congress. In particular, numerous past pupils and cooperators visited the stand, happy that even here Don Bosco was so well represented. Several families from Latin America, Asia and Europe approached the stand to share their experiences. 47 pilgrims from Canada and North America did the same.

Two special visitors, two Salesian cardinals who were invited to speak or conduct a Seminar during the Congress, also approached the stand. Both Cardinal Óscar Rodriguez Maradiaga from Honduras and Cardinal Charles Maung Bo from Myanmar were happy to meet Fr Eunan McDonnell, Superior of the Province of Ireland, who presented them with a book on Salesian accompaniment to young people.

Special emphasis was given to Don Bosco Care, which in Ireland is committed to guaranteeing security and providing a home for young people who cannot live with their families. The Salesians try to reach all those children at risk, who have suffered physical and psychological abuse or who do not live in a healthy environment. When a young man with these characteristics is accepted in Don Bosco Care, he is treated with the utmost respect.

The Salesian presence at the World Meeting of Families is the fruit of the collaboration between Salesians, FMA, Savio Volunteers, Vides and Don Bosco Care.