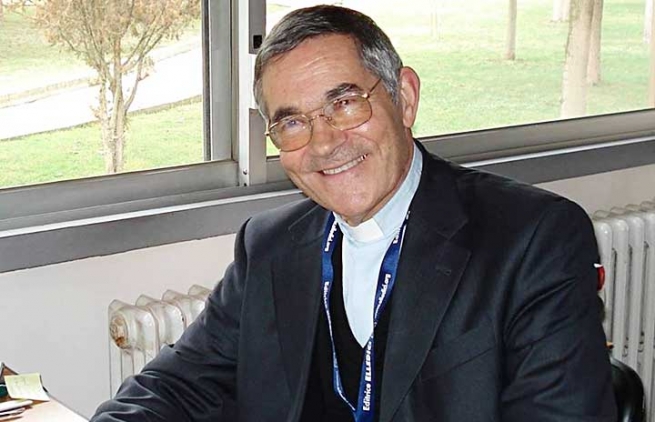 (ANS - Manique) – Fr Jeronimo Rocha Monteiro, SDB, passed away on August 31st in the city of Manique, Portugal. He was 80 years old, 61 spent in the Salesian religious life and 50 as a priest. Over the years, he served the World Federation of Don Bosco Past Pupils and visited many countries in the East Asia-Oceania region.

On behalf of the Rector Major, Fr Ángel Fernández Artime, his Vicar, Fr Francesco Cereda, sent condolences to the family, to the province of Portugal and to the World Federation of Past Pupils. Fr Cereda expressed great appreciation for the strength with which Fr Jeronimo Rocha Monteiro carried out his work.

Born in Gens-Gondomar, Fr Monteiro made his first religious profession in the Salesian Congregation in Manique on August 16, 1957, and on March 30, 1968, he was ordained a priest. In his life Fr Monteiro held positions as director, pastor, advisor and vicar of various Salesian communities, was director of "Edições Salesianas" of Portugal (2001-2002), Provincial Councilor (1993-1999, and again from 2009 to 2015), Provincial Delegate for the Salesian Family since 2008. From 2002 to 2008, he had brilliantly held the role of World Delegate of the World Confederation of Past Pupils.

The Salesian Brother Crispim, a Timorese missionary in Portugal, on learning the news, wished to express his thoughts on social networks. "Today I learned the news that Fr Jeronimo Rocha Monteiro has returned to the House of the Father," he wrote. "He has always been friendly and very close to the whole Salesian Family and, as a son of Don Bosco, always devoted to Mary Help of Christians. It is right to remember his poems and his musical compositions, which he shared every Sunday. He was a man of many talents, always ready to put himself at the service of others and, first of all, a faithful friend," he concluded.

Furthermore, one of his poems was shared, published after his visit to East Timor on the Salesian Bulletin. Its title is "Timor": "Breath of a sea of new people, dotted with the colors of Timor, diamonds of smiles, harmonized with the course of youth ... welcome people rich in soul and limitless in their generosity."