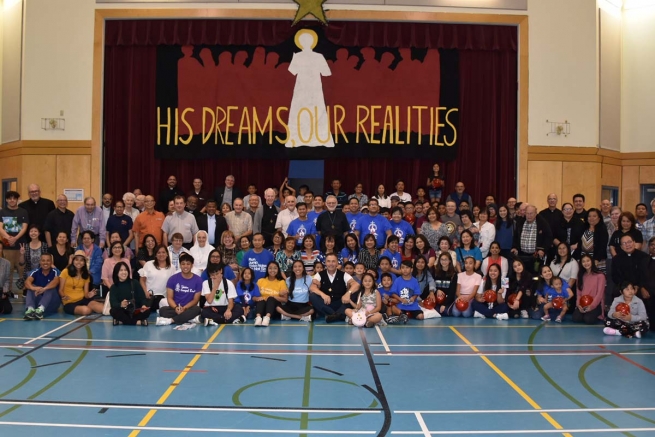 (ANS - Surrey) - The visit of the Rector Major, Fr Ángel Fernández Artime, continues in the province of the United States of America and Canada (SUE). The tenth successor of Don Bosco, who arrived in Canada on 3 September, has already taken part in various meetings and events.

On the morning of 4 September, the Rector Major met with the Provincial Council of the United States East - Canada Province "New Rochelle" (SUE). It was an opportunity to learn about the strengths of the Province and the challenges awaiting it.

Fr Ángel Fernández Artime noted that the Congregation was hardly asleep, but rather full of life and hope. He underlined their clear will to always commit themselves to the young, the poor, the immigrants and all those who live in situations at risk. He mentioned that it was important for the Province not to remain anchored in the past, but to face contemporary challenges with creativity and flexibility, as Don Bosco would have done. Despite the difficulties, which are a part of life, he said one could clearly see all the good things the Salesians did every day, not only in this Province but in all the continents.

After the daily commitments, on the evening of 4 September, the Rector Major took part in a meeting with the youth of Surrey. The children of the choir of the elementary school of Our Lady of Good Counsel opened the evening celebrations. After them, the Hispanic choir musicians performed and sang several songs for the Rector Major.

After the performance, Fr Ángel Fernández Artime, talked with the young, answering their questions and addressing issues such as vocations, faith, the way of life of today's young people and the importance of art in Salesian education.

Subsequently, some members of the prayer group opened the dances, inviting the Rector Major to join them on the dance floor.

The participants in this evening meeting were invited to honor the visit of the Successor of Don Boscoby giving their contribution to digging a well in Ghana. Donations can be made through www.salesianmissions.org.

At the end of the evening, everyone joined the chorus to sing: "San Juan Bosco Bienvenido".

The commitments continued on 5 September. After the morning Mass, the Rector Major blessed an FMA house, which arrived in Surrey a month ago. He then spent time with the students of the elementary school of Our Lady of Good Counsel. After Surrey, Fr Ángel Fernández Artime, moved to Toronto, from where he continues his visit.