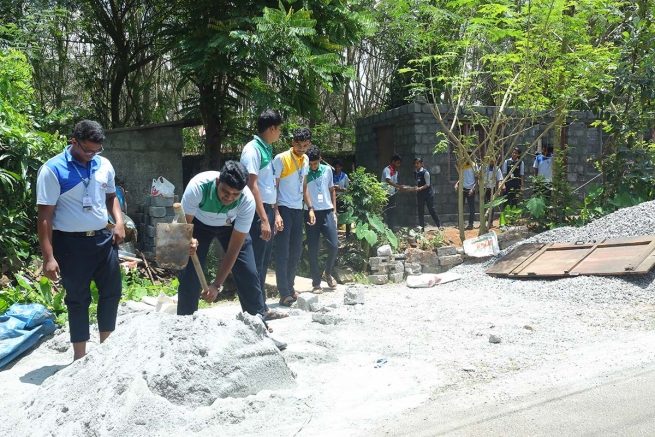 (ANS – Thrissur) – Recent floods in Kerala marred its topography and rendered millions homeless, but Kerala is limping back to normalcy with the invaluable service offered by several volunteers. Don Bosco Higher Secondary School (HSS), Mannuthy, Thrissur, is on the forefront in the mission to rebuild houses of the flood victims. The school has adopted five houses to rebuild and the staff and students are out in the field to bring home the devastated people.

A batch of twenty students visit the construction site every day and help out in bringing the materials to the site. The project costs, along with household materials, from two to three lakhs of rupees. “It is a very humble way of shouldering the sufferings of the afflicted people, to bring some solace in their life,” said Father Geo Kalladanthyil, SDB, Principal of Don Bosco HSS.

Don Bosco HSS had opened its doors for the flood victims and offered food and shelter during the mayhem days of the Kerala flood. The children affected by the flood were provided with text books, note books, and uniforms by the school management, staff and students. They have initiated a fund to contribute to the Chief Minister's Relief Fund.

The floods that hit Kerala last August are judged to be the worst of the last one hundred years, have caused circa 500 deaths and have directly affected about a sixth of the population throughout the country.