Italy – Venezuela Re(in)volution: from Bolivarian dream to nightmare of the crisis 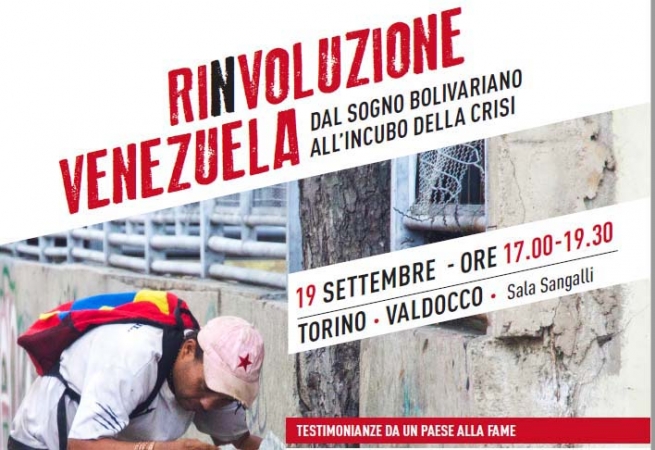 (ANS - Turin) - The "Bolivarian revolution" in Venezuela has become a nightmare, so much so that millions of Venezuelans are fleeing. The loss of purchasing power of wages, the increase of violence to procure means of subsistence, the fear of expressing oneself because of the repression are generating the largest mass exodus in the history of all Latin America. Salesians cannot stand by and watch, and why they have organized a conference of information and awareness raising for this Wednesday, September 19, in Turin; its title: "Ri (n) voluzione Venezuela: from the Bolivarian dream to the nightmare of the crisis."

The Salesian network, rooted in Venezuela for over 120 years, is particularly sensitive to the condition of young people to whom it dedicates its educational charism in parishes, oratories and schools. And for this reason Salesians are very worried about the dangers that young people face in a reality where violence dominates the streets and where there are no prospects in the economic field - despite the country being very rich in oil.

To take stock of the "Venezuela case", Missioni Don Bosco organized a conference aimed at highlighting the gravity of the economic and social crisis to which it seems that the international community and the media do not want to devote sufficient attention.

The conference will gather testimonies from the country that is going through the most serious crisis in its history and will present the commitment of Missioni Don Bosco and the entire Salesian Family to help young people and their families.

The conference will also be broadcast live on the Missioni Don Bosco website and on the Facebook page.

In addition, readers and listeners are invited to ask questions to guests beforehand and live, by writing to: This email address is being protected from spambots. You need JavaScript enabled to view it.