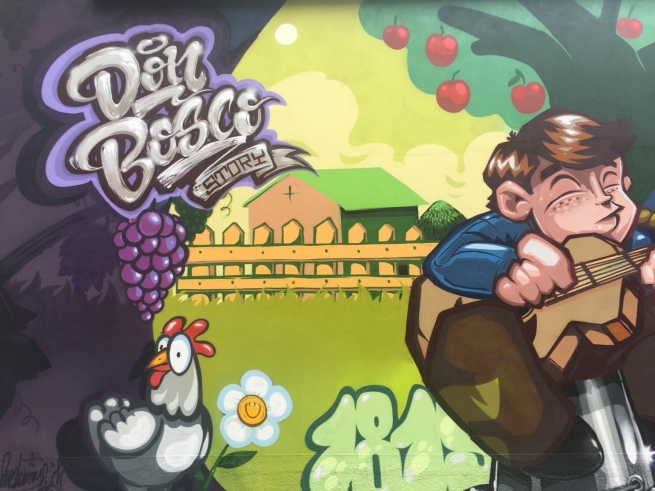 (ANS - Turin) - "Love what the young love, so that they love what you love." This famous maxim of Don Bosco has now been recreated in drawings and colors on the walls around Valdocco, where in the last two weeks a famous street artist, Andrea Sergio, aka "Mr. Wany", painted the story of Don Bosco with his spray cans.

On the walls on the corner between Via Maria Ausiliatrice and Via Cigna, which surround the Salesian Motherhouse in Valdocco, the imprint of the artist from Brindisi are there for everyone to see and enjoy, an opus inspired by the short audiovisual timeline on Don Bosco already produced for "Missioni Don Bosco" by the illustrator Mauro Borgarello that has created new links between the Sons of Don Bosco and the territory where the experience of the oratories and the vocational training schools was born.

Dedicated to the 150th anniversary of the consecration of the Basilica of Mary Help of Christians, the 170 square meters of graffiti have provoked reactions not only in young people, related for generational reasons to the culture of hip hop and street art, but also in the residents and in Valdocco's visitors, enthusiastic about the figurative performance of Mr. Wany.

Closing the narration of Don Bosco's life, there is an expressionistic face of the Saint of the Youth, which completes the sequence of figurative dates and suggestions with which the childhood and work of the Piedmontese priest are evoked.

The "Don Bosco Story" shall be a pleasant surprise for the inhabitants of the Aurora district, for the pilgrims who daily visit the Basilica of Mary Help of Christians, and for the new Salesians and their friends who will come to celebrate the 149th Salesian Missionary Expedition at the end of the month.

It is also for this reason that "Missioni Don Bosco" of Turin has curated the initiative: the image of a religious family attentive to young people and able to speak their language as it did in its origins, is a beautiful sign that today's missionaries can and must carry with them.

Mr. Wany's performance has been documented with photographs and audio-visuals, and a video reportage will also be produced.

Thanks to Mr. Wany's commitment and art, Don Bosco's life and actions are now represented with the language of the young generations just outside the Motherhouse of all Salesian works.