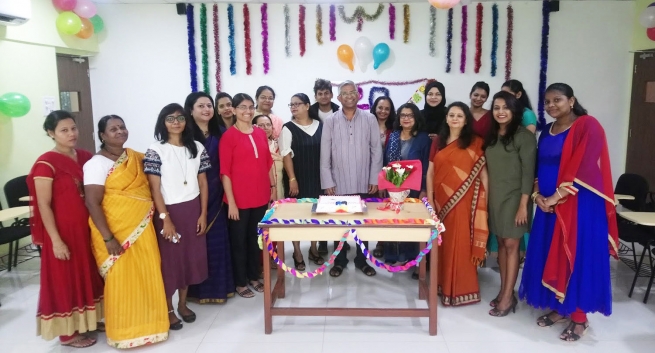 (ANS – Mumbai) – “Prafulta Psychological Services”, a Don Bosco Project initiated by the Salesians of Don Bosco in the Mumbai Province, celebrated its 20th anniversary at its Andheri headquarters on September 2018.

The organisation, Prafulta, which implies exuberance, abundance, and wholeness, began in 1998, with an aim to help clients understand, accept and deal effectively with the influences of their environment, take personal responsibility for their lives, create a meaningful future for themselves and thus live life abundantly.

Prafulta has lived up to its mission of providing quality psychological and psychiatric services to help individuals, groups, and families move towards optimal, independent functioning and improve their quality of life.

Twenty-three staff from the organisation attended the anniversary celebration in the seminar hall of Prafulta, which was decorated with balloons and ribbons. A symbolic cake was cut before the celebrations began. The young members of Prafulta were the emerging DJ's and party hosts.There was games, laughter, dancing, selfies and a message by Father Godfrey D'Sa, Founder Director of Prafulta Psychological Service, expressing gratitude to the Prafulta staff both past and present.

''Thousands of people had been reached by the organisation in many ways and the ones who were trained by Prafulta further reached out to many others. So it is difficult to quantify our reach, but at the same time Prafulta has to now aim at the expansion of its activities so that people become aware of the work it does and the importance of mental health,'' Father D'Sa said.