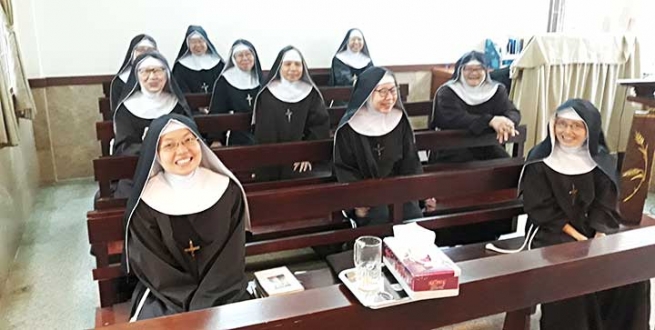 (ANS - Bangkok) –  'I'm the servant of the Lord' - this is the motto of the Sisters 'Servants of the Immaculate Heart of Mary' (SIHM, group of Salesian Family) born in Thailand more than 80 years ago with 92 sisters and two novices. Together with the SDB (80 members), FMA Sisters (84 members), SQM (Sisters of Queenship of Mary, 26 members) and two secular institutes - DQM (Daugthers of Queenship of Mary, 39 members) and VDB (Volunteers of Don Bosco, 15 members) the Salesian Family makes a significant portion (16%) of the total1542 consecrated religious women and 462 religious men.

In the small and scattered Catholic presence in Thailand - a country where Catholics represent only 0.3% of the entire population - the religious men and women are among the most visible signs of God's love for their fellow country people, great majority of Buddhist religion. However the Catholic Church plays a leading role in education (from kindegarten to university), in cancer treatment, in promoting human dignity and self-empowerment, especially among the ethnic minorities of the Northern peripheries.

Among the men religious the SDB are the first most numerous Congregation (80 SDB), followed by the Redemptorists (70 CsSR), Monfort Brothers (68) and Camillian Brothers (58) with another 22 religious orders and congregations, majority with very few members.

With the fast growing industrial and IT society, with a strong domestic migration also the vocation to religious life are significantly decreased. Most of the religious still foster the system of aspirantates (starting from junior school). We pray for the faith, wisdom and sharing of good practices in fostering a solid vocation culture in Thailand.

As far as male institutes are concerned, the Salesians of Don Bosco are the most numerous congregation, with 80 members. They are followed by the Redemptorists, the Gabrielists and the Camillians. There are another twenty-two orders and congregations, most of which count, however, only a few members.

With the rapid industrial growth and the strong internal migratory push, religious life in Thailand has decreased significantly. Most religious orders, however, encourage the system of aspirants, praying for faith and sharing good practices that can further foster a vocational culture in Thailand.