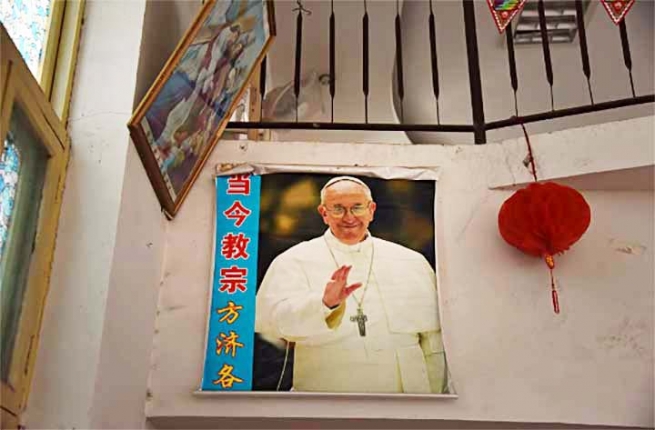 (ANS - Vatican City) - In the end, a mission so important and delicate could only be entrusted to Mary Help of Christians: the Madonna of Don Bosco, the Virgin that Pope Francis paid homage to every 24 of the month since even as a bishop in Buenos Aires, and above all, the title to which the millions of Catholics in China are more closely linked. On the occasion of the Provisional Agreement between the Holy See and the People's Republic of China, and at the conclusion of his pastoral letter to the faithful in China, Pope Francis delivers this further step of rapprochement between the Vatican and Beijing to the care of the Celestial Mother.

The Provisional Agreement arrives after long years of preparatory work. "It is the times of God, which resemble the Chinese time: slowly," joked, but just, Pope Francis on his way back from Estonia to the Vatican.

This is a negotiation where, as the Pope has always explained, both parties have had to give up something. For some it is also a source of "doubts and perplexities": even the Pontiff admitted this in his letter. Perhaps because those who have endured for years the difficulties and problems of living in the so-called "underground Church" today are questioning "the value of the sufferings faced to live in fidelity to the Successor of Peter".

The Holy Father does not turn his head away to the other side. "Such painful experiences belong to the spiritual treasure of the Church in China and of the whole People of God." Yet he looks to China "as a land full of great opportunities and to the Chinese people as the architect and guardian of an inestimable heritage of culture and wisdom."

On the specific theme of the appointment of bishops, the Pope assured "that the nomination is from Rome; the appointment is of the Pope", and the dialogue concerns the antecedent phase, the identification of the candidates. In any case, the agreement represents a turning point for the Catholic Church in China because for the first time, it introduces stable elements of collaboration and because it proceeds in the direction of reconstituting the full and visible unity of the Church.

"Dialogue is a risk, but I prefer the risk to the sure defeat of not talking," the Holy Father had said months ago. And for the future, there is always something to look up to: "Mary, Help of Christians, for China we ask you days of blessing and peace" is the conclusion of the prayer signed by Pope Francis for this special mission.