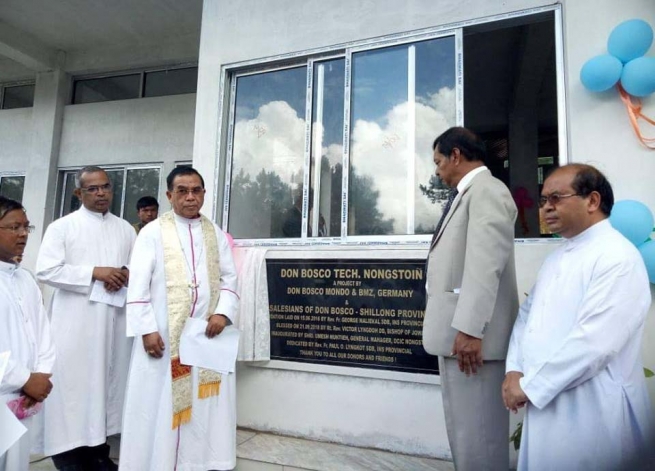 The institution was blessed by Bishop Victor Lyngdoh of Jowai Diocese who was the guest of honour.

Umesh Muktieh, the day's chief guest, inaugurated the centre. Speaking on the occasion, the Chief Guest said West Khasi Hills has been neglected for many years so the institution is a “gift given by the Salesians of Don Bosco” and urged the youths to make use of it. He also expressed disappointment over a few organisations who were blocking the development of the district by calling curfews while construction of the institution was underway.

Father Paul O Lyngkot, the Provincial, welcomed the gathering and thanked all the benefactors and collaborators to build this institution which will empower and nurture the youth through Education. Father George Maliekal, the former provincial who started the construction of this institution, was overwhelmed at the development taking place in this part of the state. He expressed his joy at the completion of the project.

Father James Thyrniang, the Provincial Economer, thanked the many benefactors, and especially the Bonn Office from Germany, and all the collaborators, to make this dream into a reality. He thanked Bah Gilfred Sawian, the contractor, who worked with dedication for the completion of the building. He wished Brother Paschal Dkhar and Brother Quirinus Warkhyllew, the manager and the Principal of this institution, for all the work that lies ahead, giving opportunities for the youth of West Khasi Hills to be educated, to be employed and to create employment like any other youth in the country.

The Salesians also explained the institution will provide short-term skill training to the youths, to make them employable and self reliant. Eight courses have been scheduled for the September-December term: House Wiring and Basic Electrician, Driving, Basic Computer, Data Entry, Spoken English, Electronics, Welding and Fabrication, Carpentry and Cabinet Making.

Don Bosco Tech Nongstoin aims to be a centre for the uplifting and development of the poor young people of West Khasi Hills District. “We build now to create the better future” is its motto.