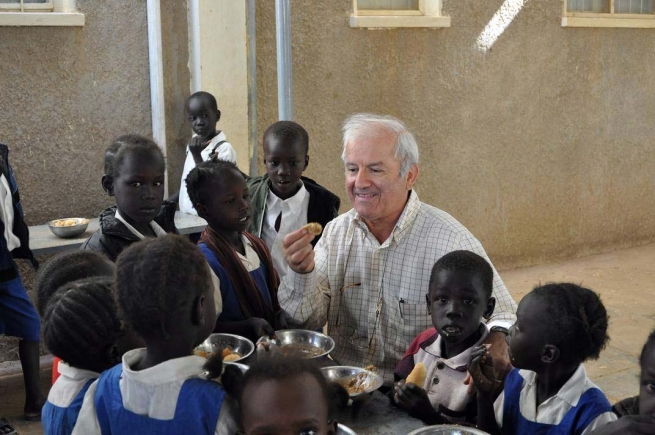 (ANS - Juba) - Despite South Sudanese political leaders signing the final document of the peace agreements last September 12, skepticism still reigns among people. Often, in the past, the various signed agreements remained dead letters and people's living conditions worsened. Waiting to see what turn the events take, the Salesians continue to do what they have always done, in times of peace or danger: educate the young, especially the most needy.

As noted by the bishop of Barani, mgr. Eduardo Hiiboro Kussala, on the agreement weigh "a certain lack of transparency and the exclusion of other parties involved in the process." The development of relations with neighboring states, in which very sensitive aspects are grafted with regard to religious tolerance, is another fact that heavily influences the condition of the country.

Salesian brother Jim Comino also hopes to see peace take root. But he does not just sit by and wait for change: for decades he has known the difficulty of building development and formation initiatives so that young people take their future in their hands. "We are committed to helping refugees through reconciliation activities and spiritual paths to achieve peace among the different tribes," he explains in a letter. "We try to give inspiration and hope for a more humane future, living the Christian spirit."

In addition to this there is immediate help for the needy, "a desperate race against time" as the Salesian describes it. At the same time, agricultural projects are activated so people may live and be autonomous on their own land, avoiding illegal emigration. It is estimated that one third of the population has left their villages; the drama of hunger affects at least 15,000 people in the refugee camp in which the Salesians operate, and among them, about 5,000 children attending school. "We want to guarantee them at least one meal a day, for many the only one. Often the weakest faint during the lessons," explains Br Comino.

Another goal of the Salesians in South Sudan is to expand the school of Nizito, which is currently unable to satisfy the village's request. The spiritual Sons of Don Bosco want to give each of them a chair, a bench, educational material ...

Working on education means working for peace. "Only by making the South Sudanese self-sufficient can we end the tribal struggles," concludes Br Comino.