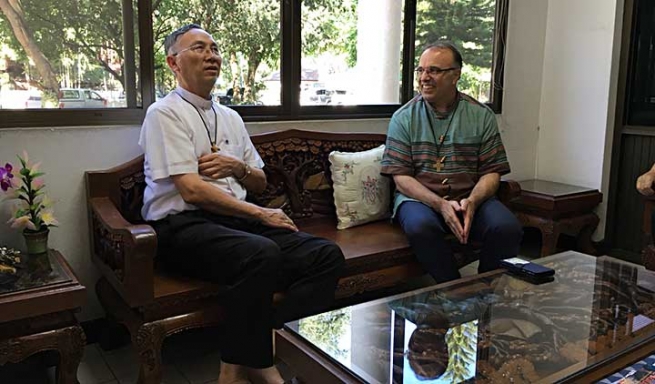 (ANS – Chiang Mai) – In a recent courtesy visit, the diocesan bishop of Chiang Mai, Bishop Francis Xavier Vira Arpondaratana, a Past Pupil of the Salesian University (Catechetics - Youth Ministry, 1986-1989) and a good friend of the Salesian Family, expressed his dream for the future Salesian commitment in this special part of the Thai Catholic Church.

The Salesians of Don Bosco have been in Chiang Mai, in Thailand's north, since 2004, first with the Catechetical Center at Mae Rim and the St Joseph the Worker parish, then with the Agricultural Centre at Doi Siew and the Don Bosco Home at Doi Saket (2008), followed by the Junior Aspirantate (2009).

The religious community was canonically erected only five years ago, at present with 5 Salesians: the Rector Fr Anthony Restelli - two Salesian Brothers and three Salesian Priests (among them the first Karen priest of the THA province, Fr. David Vichiengsang). There are 18 junior aspirants and 58 secondary technical school boys in the DB Centre, and 7 students in the Catechetical centre. It is a rather humble but very meaningful presence. In the whole diocese there is no other group that is able to accompany adolescent boys, young men. Among the Banpong senior aspirants, no fewer than 50% are from the Chiang Mai area, most of them from the major ethnic groups of the Karen, Hmong, Hakka and Lahu.

Even after the division of the Chiang Rai diocese (April 2018), the Chiang Mai diocese remains the third most numerous Catholic diocese in the country (after Bangkok and Thare) with about 50,000 faithful and 15,000 (!) catechumens, most of them living in the not-so-accessible mountain area near the Myanmar border in the province of Mae Hong Son. 220+ catechists (in the villages and the public schools) are the only pastoral agents helping the few priests and religious to accompany the people of God. Most of the young people have no other chance for a Catholic religious education other than the summer vacation week-long camp. At present there are not even permanent deacons to help in this situation.

Some 70 per cent of all Chiang Mai diocese Catholics live in the province of Mae Hong Son, without any Catholic school at present. As a matter of fact is not easy to find any religious congregation to come there. In the context of Thai education most of the Catholic schools are quite well-established large institutions, but not many would venture into this frontier environment.

Like Don Bosco, also his Salesians are invited by the present Rector Major to dream. But each dream requires a lot of faith and hardwork to make it come true! Young and materially less-privileged Catholics and youth in the North of Thailand are waiting for their Salesians!