Italy - Harambee 2018. There is a path inside the hearts of others 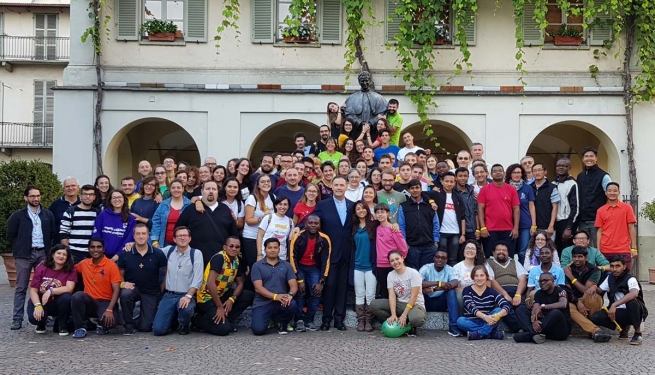 (ANS - Turin) - From 28 to 30 September, the "festive meeting" of Harambee was renewed in Turin, which annually gathers hundreds of young people who share Salesian love for the marginalized young in the poor countries and the young people who have already experienced life as a missionary volunteer.

The Harambee saw young lay people and missionaries participate in various moments of reflection and prayer on the theme of the First Christian Announcement, on where it is possible to act and on how each one is called to act in their own land.

On Friday evening the theme was reflected upon starting from the second chapter of the Gospel of Luke "I announce you a great joy" wherein participants focused on the who and on the how the very first announcement took place.

Saturday morning was spent walking along the holy places where Don Bosco himself made his first announcement: from the Sanctuary of the Consolata, to the small courtyard of the church of San Francesco d'Assisi. In the afternoon, activities were held to share the summer experiences and to witness the departing missionaries, to listen to both their choice to leave and the deeper desires of the call.

"The first word, that of the first announcement in the lives of the poor, is that of silence. Sometimes it is necessary to only stand by their side," explained Fr Stefano Mazzer, professor of Systematic Theology at the Faculty of Theology of the Salesian Pontifical University, based in Turin.

Sunday, marked by the Mass celebrating the envoy of the 149th Salesian Missionary Expedition, had previously been opened by the testimony of two lay people engaged in the oratory of Piazza Armerina, in Sicily, and by the presentation, before the Eucharist, of the missionaries departing: 25 Salesians and 11 Daughters of Mary Help of Christians.

"The mission at the heart of the people is not a part of my life or an ornament that I can take away .... I am a mission .... However, if one divides his duty on one hand and his private life on the other ... he will stop being a people," said Pope Francis in his "Evangelii Gaudium." (No. 273).