Spain - A path of communion: times of reflection, coordination and sharing 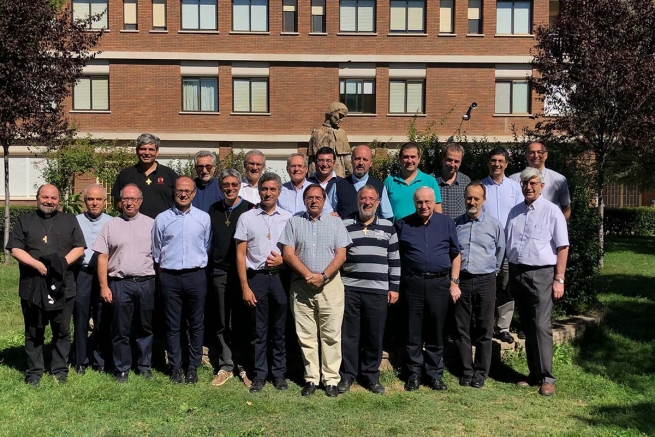 (ANS - Guadalajara) - "A journey of communion: times of reflection, coordination and sharing". In this way one can summarize the work carried out by the Salesian Provincials of the Mediterranean region from 30 September to 3 October.

A similar meeting, which concerns the Salesian presences in Portugal, Spain, Italy and the Middle East (Syria, Lebanon, Palestine and Egypt), is held every year under the guidance of the Councilor for the Mediterranean Region, Fr Stefano Martoglio. With a very tight work schedule, the meeting of the Iberian Conference was held on September 30th, which brought together only the Provincials of Portugal and Spain; on October 1 and 2, work was carried out on themes common to the Provinces of the whole region; while the 3rd of October was dedicated to the meeting only between the Provincials of Italy.

Among the topics discussed in the Iberian Conference: the reunification of Salesian NGOs, ongoing formation, publishing houses, the pastoral collaboration between Salesians and Daughters of Mary Help of Christians (FMA) and the European Network of Don Bosco International (DBI), with reference to the Salesian activities at the European Union headquarters in Brussels. On these last two themes, two guests were present: Fr Koldo Gutiérrez, SDB, Director of the National Salesian Center for Youth Ministry; and Angel Gudiña, Executive Secretary of the DBI.

Another topic was the state of the region after the Team Visit and the letter of the Rector Major; also discussed, the formation of Salesian brothers, thanks to the intervention of Fr Francisco Santos, SDB, of the Dicastery for Formation of the Salesian Congregation.

As Fr Samuel Segura, Vicar of the "Spain-St James Major" Province, said: "The meeting took place in a very pleasant atmosphere of work and sharing, which we hope will serve to animate religious life and the Salesian mission of the houses of this vast Salesian region.

The Mediterranean region has a special responsibility towards the rest of the Congregation and the Salesian Family in the world, because it is the area where the Salesian charism originated."

In the course of the work the solidarity commitment that the Provinces of Portugal, Spain and Italy have with the Province of the Middle East was also recalled, an area unfortunately marked by so many difficulties and tensions.

At the end of the meeting the Regional Councilor declared: "After four years of walking as a Region we are committed to continue to grow in the sense of belonging and collaboration."