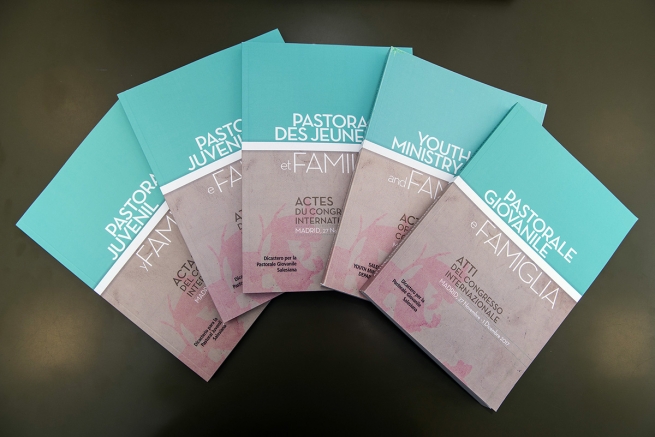 (ANS - Rome) - Less than a year after the celebration of the International Congress "Youth Ministry and Family" (Madrid, 27 November - 1 December 2017), the Salesian Youth Ministry Dicastery is pleased to announce the publication of the Proceedings of the Congress. They aim to be an instrument at the service of the animation of Salesian Youth Ministry across the globe, in the wake of the two Synods of the Bishops dedicated to the family (2014-2015), of the publication of the Apostolic Exhortation "Amoris Laetitia" (2016), and in harmony with the Synod of Bishops dedicated to "Youth, faith and vocational discernment", currently under way.

The volume opens with a presentation by the Rector Major, Fr Ángel Fernández Artime, and the introduction of the General Councilor for Youth Ministry, Fr Fabio Attard. The introduction traces, specifically, the process of the event's preparation, which involved about 400 participants representing all the Provinces of the Congregation.

The report of Msgr. Bruno Forte, archbishop of Chieti-Vasto and Special Secretary of the Synods of the Bishops on the Family, on the theme "The Family on the Synodal Path of the Church: Perspectives and Opportunities", opens the series of the four main conferences of the Congress, the true core of the Acts or Proceedings. This is followed by a further three reports presented during the central days of the Congress, namely: "The path of the Salesian Congregation", by Fr Attard; "Amoris Laetitia: challenges and proposals", by prof. Carmen Peña; "The family in the Salesian pastoral proposal", by Fr Rossano Sala, SDB. Each of these three reports is accompanied by a gathering of the participants' reflections, which emerged within the regional working groups.

In the volume, following the conclusions elaborated by the regional groups at the end of the Congress, is the description of the Mini-courses and the list of Good Practices presented by congress participants and experts speaking on the occasion. Finally, in the appendix, several charts and tables are available illustrating the approach process and the methodology adopted by the Congress, together with the final evaluation and the complete list of participants.

"Youth Ministry and Family", however, is not just the title of a Congress. The latter was the stage in a process that now sees many Salesian Provinces in the world as protagonists, committed to developing new paths of collaboration between Salesians and families at the service of the young.

The publication of the Proceedings of the Congress poses itself at the service of this logic. The texts of the Acts are now available in the five official languages of the Congress: French, English, Italian, Portuguese and Spanish.