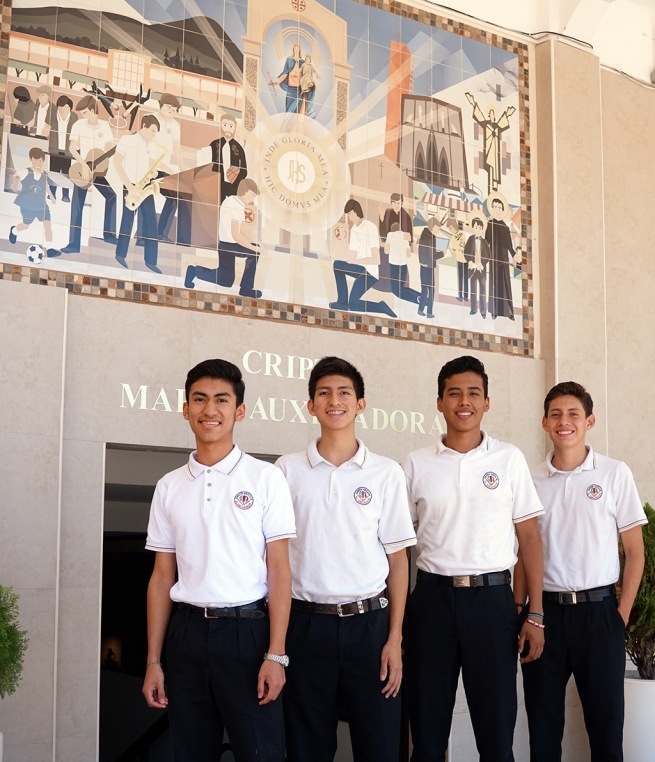 (ANS - Santa Tecla) - Stanley Méndez Renderos, Diego Portillo Cabrera, Melvin Salazar Campos and Dylan Siliézar Duarte are young artists who have expressed Salesian youth spirituality in a mural that embellishes the entrance to the recently renovated Crypt of Mary Help of Christians of Santa Tecla. They are students of the second year of Graphic Design of the "Santa Cecilia" Salesian school and they have come together to create a mural that summarizes the life of every Salesian student and in particular of the "student in a coat-jacket".

The story goes that when the house was founded, the lay Salesians wore coats. They were thus called "Salesians with coats", a name that today the students of the institute still wear.

The process of elaboration of the mural began with a painting of Mary Help of Christians of the Salesian Brother Luigi Zonta. The four young people started the creative work and decided to divide the work to each contribute with their own style.

"We have divided the tasks among ourselves to represent the way a student lives within the school. We met constantly to organize and give continuity to the project," said Portillo Cabrera.

The contribution of Dylan Siliézar Duarte was to depict the Eucharist, the altar of Mary Help of Christians, the Temple with its characteristic mosaic of Jesus, and also to immortalize the student Andrés Mata, who died in 2015.

For his part, Stanley Méndez Renderos developed illustrations relating to music, the sky, the volcano, to students and young people as they worship the Blessed Sacrament.

Diego Portillo Cabrera depicted Don Bosco, Domenico Savio, of the temple tower and of the scholastic theater. "Fundamentally I built infrastructures and characters, like the dancers of the 'Choreographic Force of the Salesian School of Santa Cecilia," he said.

Finally, Melvin Salazar Campos produced the image of the priest who confesses, the faces of some students and the child of the nursery school.

The mural measures 2.80 meters wide by 1.60 meters high. It use earthy color tones to blend in with the tones of the crypt.

One of the main challenges of this opus was to compose and merge the four styles into one. The artists feel satisfied with the finished work and are convinced that in this way they have given the Salesian institution, which they so much appreciate, a bit of their talents.

Without a doubt, it will be a contribution that will be preserved over time and that fills the community "with coats" with pride. "It's nice to know that we left a mark on the school," said Siliézar Duarte.

The mural consists of 112 ceramics that have been printed with an avant-garde technique that guarantees its durability.