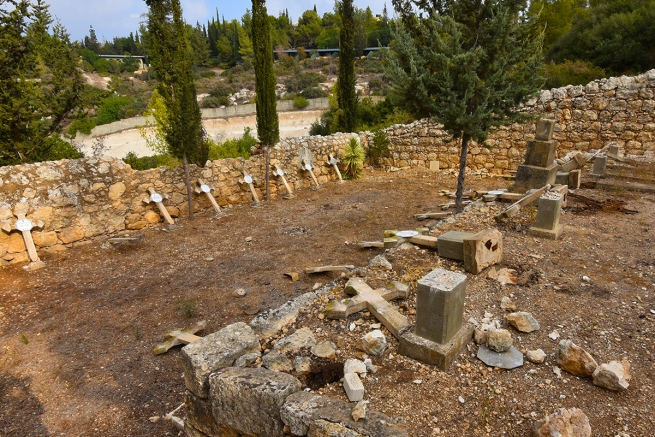 (ANS - Beit Jemal) - The Catholic cemetery annexed to the Salesian convent of Beit Jemal, in the Israeli city of Beit Shemesh, west of Jerusalem, was again desecrated. On Wednesday 17 October, the Salesians of the community found as many as 28 tombs with their sepulchral crosses demolished. Sadly, it is not the first time it happens.

Back in 2013, an incendiary bomb was thrown at a door of the convent and blasphemous slogans written on the walls of the building. The cemetery area was then targeted in December 2015, when unknown assailants tore the crosses from  tombs and destroyed several statues.

Also, just over a year ago, in September 2017, unknown vandals attacked the church of St Stephen, still in the same complex as the Beit Jemal community, destroying statues and stained glass and overthrowing sacred fixtures.

"It is a matter of regret and anger to see ourselves again having to condemn these criminal acts, repeated many times in recent years," the Assembly of Catholic Ordinaries of the Holy Land said in a statement.

The Israeli police, for its part, reported that they have initiated investigations.

While the response of the Salesian community to this new event is the same used by Jesus himself on the Cross. "Father, forgive them for they do not know what they do," the spiritual Sons of Don Bosco have, regardless and despite the repetition of vandalism and attacks on sacred sites, expressed the desire to continue to remain on site and to serve the local community.