Guatemala - A home for those who need it: "... The Providence of God sends me the opportunity to help many people" 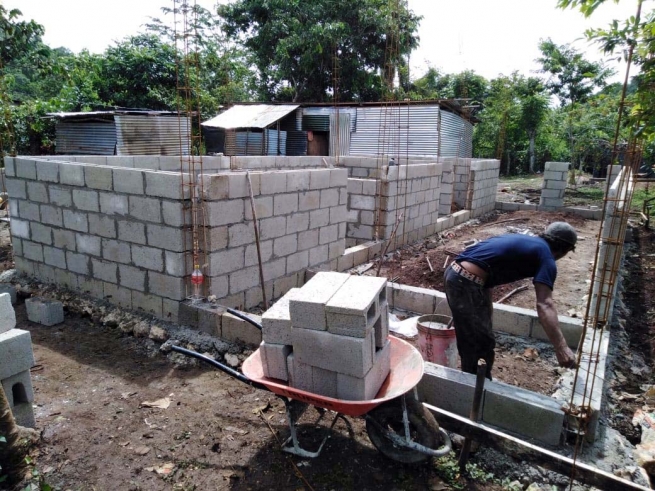 In the Salesian mission's territory, many people live in extremely trying conditions. There are people who live in houses made of sheet metal, this in an area where the average temperature is above 30 ° C all year round, thus making 'ovens' of the dwellings; and there are people who cannot even afford a sheet metal house and live within a home made of four wooden poles covered with black nylon sheets, which makes the 'houses' even worse than the sheet metal homes.

Now, thanks to "Fundepaz", an NGO led by a Colombian priest living in the United States, namely Fr Fernando Echeverria, the construction of two new homes for the area's poor families has begun. According to the work schedule, these first two houses will be completed by the end of the year; and by 2019 there are plans to build another 20 houses.

The meeting between the Colombian priest and the Salesian mission of Petén was merely by chance. Fr Echeverria did not know the mission, but was interested in the situation of the Petén after reading about the various calamities that struck the country in recent years and the many problems still afflicting it. While visiting Guatemala in search of a project to help the population, he discovered that the Petén region is one of the worst realities in the country.

He contacted a local journalist, who attends the Salesian parish, and arrived at the gates of Fr De Nardi, where he asked to work together for a project to build houses for the poor.

"As always, God opens paths that we do not even know," says Fr De Nardi. "I thought: 'this is the Providence of God who sends me the opportunity to help many people'. And clearly I did not have to have it repeated twice."