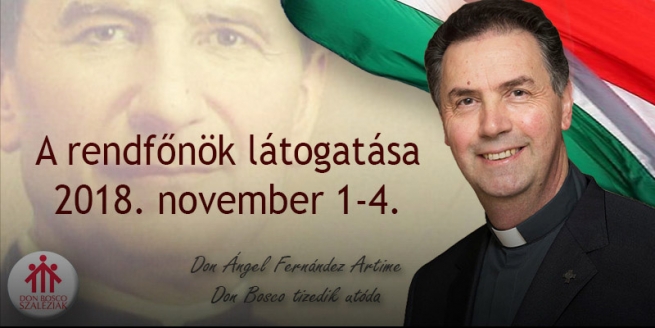 (ANS - Rome) - After participating as an elected member of the Union of Provincials General, at the Synod of Bishops on Youth, the Rector Major, Fr Ángel Fernández Artime, now resumes his activity of animation of the Salesians across the world. The month of November promises to be full of events and the first stop will be at the "St Stephen King" Province of Hungary.

Fr Á.F. Artime lands in Budapest, the country's capital, on Thursday 1 November, together with his Secretary, Fr Horacio López, and will continue his visit through the country until Sunday 4, accompanied by the Regional Councilor for Central and Northern Europe, Fr Tadeusz Rozmus.

During his visit in the Magyar, the X Successor of Don Bosco shall visit the Salesian presences of Budapest and Kazincbarcika, in the North-East of the country, not far from the border with Slovakia.

After a first meeting with the Salesians, at the end of November 1st, Fr Á.F. Artime will reach Kazincbarcika on Friday to meet the Provincial Council and celebrate the Eucharist with his confreres and young people at the church of the Holy Family. In the afternoon, at the "Don Bosco Sportcsarnok" center, he will deepen his knowledge and dialogue with the local youth and will return to Budapest in the evening.

On Saturday 3, the Rector Major will first gather with all the Salesians of the Province in what is now a traditional appointment of his animation visits; then he will take part in the annual Pedagogy Conference, taking his message to the teachers of Salesian schools in the country. Finally, in the afternoon, at the "Clarisseum" - a very meaningful place for Hungarian Salesians, in which Blessed Stephen Sándor lived - he will meet the Daughters of Mary Help of Christians, celebrate the Mass and greet the local Salesian Family.