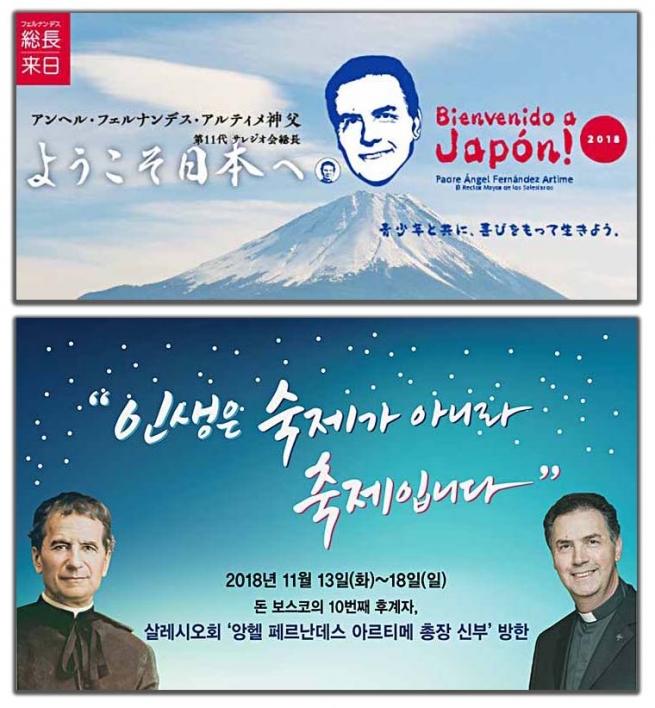 (ANS - Rome) - Two Provinces, 12 days of travel, numerous flying hours and many significant meetings: starting tomorrow, this is what awaits the Rector Major during his trip to Japan and South Korea.

After the meeting with the Tokio-Chofu community, he will spend 8 and 9 November in Miyazaki, meeting the Salesians, the young, and the Sisters of Charity of Jesus.

Saturday, November 10, again in Tokyo-Chofu, he shall participate in the meeting with the Provincial Council and spend an afternoon of dialogue and celebration with the young people who attend Salesian works.

There are also two main events for Sunday 11: a visit to the Salesian center in Tokyo-Gakuen, which promotes initiatives with young people in difficulty; and the meeting with the Salesian Family, with the Rector Major presiding over the Sunday Eucharist.

On Monday 12, the last effective day of the Japanese stage of his visit, there is a meeting  scheduled with all Salesians in the Japan Province and a visit to the Gakuin Secondary School.

From the following day the Rector Major will be visiting South Korea. The visit starts with an initial meeting with local media, then meeting with and learning about the Dae Rim Dong community in Seoul, and an evening of academia.

The central act on Wednesday 14 will be a prayer for peace that the Rector Major will officiate at in the Church of Penance and Redemption in the Imjingak Park, a highly symbolic site located on the border with North Korea, which intends to celebrate the desire for peace and unity between the two countries.

The following Thursday, Fr Á.F. Artime will spend at the community of Nae Ri, where he shall also meet with the Salesians of the Province. On Friday, he meets with teachers and staff of the Salesian schools, young people and Sisters of Charity of Jesus; on Saturday 17, he will be busy first with the Provincial Council and the Apostolic Nuncio in the country, and then at Mass in which he will receive the promise of several new Salesian Cooperators.

On Sunday 18, the Rector Major will greet the Salesians of the "Holy Martyrs of Korea" Province and return to Rome; not before, however, a fraternal meeting with the Daughters of Mary Help of Christians of South Korea.