Japan - Rector Major to Salesian Family: "To become one for others" 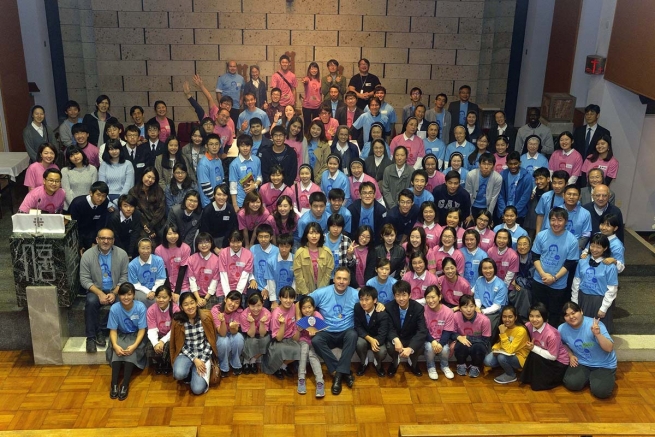 (ANS - Tokyo) – Amid the festive meetings, celebrations and words of encouragement to the young and the Salesian Family, the Rector Major's Animation Visit to Japan proceeds as scheduled.

Fr Ángel Fernández Artime reached Miyazaki on the afternoon of Thursday 8 November, receiving the warm welcome of the local Salesian Family. He then spent the evening with about 50 teachers from the "Hyuga" Salesian High School to whom the 10th Successor of Don Bosco recalled that it is not enough to love young people: they, the young, must also know that they are loved.

The following day opened with the morning Mass presided by the Rector Major at the same school, in front of about 700 students and members of the Salesian Family. "Unity" was the key word of the Rector Major's homily. Subsequently, Fr Á.F. Artime spent time speaking openly with the young who'd gathered about. He admired the activities of the youth festival of the school's students - an annual event of great importance for the institute - and visited the Mother House of the Sisters of Charity of Jesus, where an International Congress is taking place.

On his return to Tokyo, the Rector Major ended the long day with a visit to the offices of various activities at the Salesian Provincial House, including the Salesian publisher "Don Bosco Press".

On Saturday, after having gathered with the Provincial Council of Japan, Fr Á.F. Artime spent the whole afternoon and evening with about 130 youngsters of the Salesian Youth Movement, in a large and joyous gathering culminating in a Eucharistic adoration (SYM). "Our teachers are very friendly"; "Today, here among you, I perceive the authentic Salesian atmosphere", are some of the words and thoughts the children participating in the festivities expressed.

For his part, the Rector Major said he was happy to have met and listened to several young people during his visit to Japan. He urged the young to have great dreams and ideals, to dedicate themselves to others and to stay close to God. "I believe in you" and "I love you very much, simply because you are young" are some of the phrases that, as a true Successor of Don Bosco, Fr Á.F. Artime said on the occasion.

Then, in the afternoon, he participated in the great feast of the Japanese Salesian Family, held at the "Kita Ward" house of the Daughters of Mary Help of Christians, with the participation of about 400 people.

It was a gathering that was able to combine many aspects: first the presentation of the various groups; then the intervention of the Rector Major, who made an appeal to work together and with creativity, and thus "become one thing only for others"; then a solemn Eucharist presided over by Msgr. Mario Yamanouchi, SDB, bishop of Saitama, and concelebrated by the Rector Major, by his Secretary, Fr Horacio López, by the Provincial of Japan, Fr Jacob Hamaguchi, and by the Councilor for the East Asia-Oceania Region, Fr Václav Klement; and finally an evening of fraternal agape, embellished with an amusing spectacle by the Salesian magician Fr Mickey Muramatsu, and by the songs of the Rector Major, his Secretary, and by Msgr. Yamanouchi.