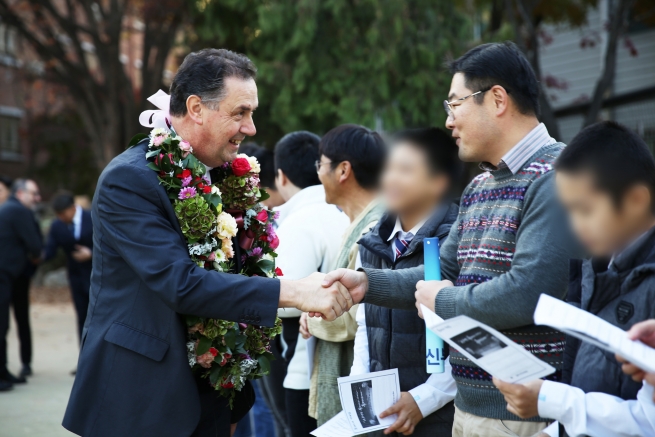 (ANS – Seoul) – During his first day of the Animation Visit in the Korean Province (KOR), the Rector Major, Fr Ángel Fernández Artime, had an interview with reporters and visited DaeRim-Dong Youth Center, known as the "Korean Valdocco".

“During the next few days I would like to be close to the Korean life reality, especially to the Salesian family reality in South Korea. These visits are part of my 6-year ministry, an important duty. Until today, I have visited 82 nations during the past 5 years,” Fr Á.F. Artime told journalists.

Many themes were discussed by the Rector Major during this meeting. On the recently concluded Synod of Bishops, he affirmed that the real work begins now, trying to put into practice the proposals and reflections that emerged, especially on listening to and accompanying young people. Speaking of the afternoon visit to the "Valdocco of Korea", the center that welcomes and rehabilitates the children reported by the Minors Courts, he observed that this is a typically Salesian choice: in visits, not all houses are visited, but the most meaningful ones - such as the camp for refugees in Kakuma, Kenya; or the Don Bosco Center of Medellín, which works with former child soldiers ... - because for the Salesians there is nothing more important than young people in need.

One question covered the visit scheduled for Wednesday 14 at Imjingak Park, located on the border with North Korea. The Rector Major rejoiced for the recent steps forward between the two countries and affirmed: "Peace and unity are the only way. Reunification would be wonderful!" He said he was going to Imjingak, thinking also about Pope Francis, who in 2014 wished to have reached the site to pray for peace.

Fr Á.F. Artime also said that in each country he visited he was able to appreciate the joy and potential of young people, as well as the value of Salesian work; he explained the concept of "holiness or sainthood for all", which is at the center of the next Strenna; he recalled the Salesian focus on education and of preventive work for responding to and as a solution to the problems of today's youth; and he re-launched the appeal to the whole Salesian Family to be courageous and to undertake new ways of apostolate and service.

In the afternoon, the X Successor of Don Bosco then went to the center of DaeRim-Dong. The Salesians operate the DaeRim-Dong Youth Center, on request of Korea's Ministry of Justice. The center protects and treats teenagers. Currently there are 40 teenagers, 4 Salesians and 20 co-workers in the center.

During Mass, a teenager who learned carpentry at the center dedicated a frame of a wooden image of Jesus to the Rector Major. Served to the Rector Major for dinner was a traditional Korean meal. He sat between a teacher, Kim Gyu Won, who worked for 26 years at the department of Pottery (the Rector Major praised him as “another Salesian”), and the Chairman of the Students Association of DaeRim-Dong Youth Center, who though his period of protection and observation was over, remained in the Salesian facility which, he said, he liked a lot.

Later, the Rector Major saw pieces of the wooden and pottery craft workshops, which he asked about; the center happily presented him several wooden and pottery pieces. After sharing a short time in friendly talks with the people in the center, he encouraged and animated all those who lived positively even under difficult situation.

Finally, the Rector Major attended the yearly ceremony of the Autumn concert of the DaeRim-Dong Youth Center. All teenagers living in the center performed, with music,song, and dance. The chorus, music video and dance of coworkers, cooperators, friends of Michele Magone, and SYM were also impressive.

The highlight of the performances was the musical “The Letter of Mother” performed by teenagers living in the DaeRim-Dong Salesian center. The teacher in charge of the play therapy and the teenagers performed the musical. Most of the audience, especially parents and families, were moved by the show and wept.

After the emotional Autumn concert, the Rector Major, accompanied by his Secretary, Fr Horacio López, and by the Councilor for the East Asia-Oceania Region, Fr Václav Klement, returned to the Provincial house to completed his first day in South Korea.