South Korea – Rector Major: “I truly believe that our Father Don Bosco is there in your hearts now” 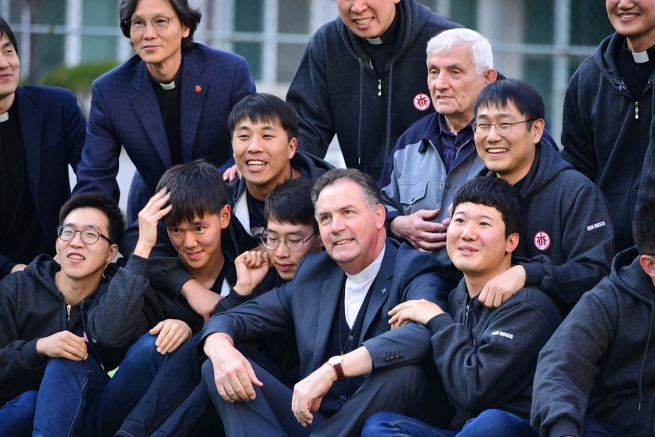 (ANS – Seoul) – November 14, Day 2 of the Rector Major's visit to Korea began with the visit, along with 45 Korean Salesians, to the Observatory Centre at Mt Odu, where the real situation between South and North Korea is vividly experienced. The Rector Major could not hide his genuine surprise at the fact that North Korea is so close to the South, where he stood on the other side of Im-Jin river.

The Rector Major also mentioned seeing the many tearful messages from separated families and the piano that was uniquely made from the iron fence left over from the frontline defence. It would serve as an unforgettable memory of this visit, he said.

The Rector Major then moved on to the Church of Penance and Atonement, just 5 minutes from the observatory, with the accompanying Salesians. This church is intentionally designed to adopt a Korean traditional architecture. He prayed there for the unification of South and North Korea. He briefly toured the picture exhibition room and celebrated Mass on the altar that is shaped like the Korean Peninsula. He prayed for all the Salesian Family and for the peace and unification of one Korea.

In the afternoon of 14 November, the Rector Major visited the Don Bosco Youth Centre with the only vocational training school in the Korean Province.

He walked around the entire Don Bosco Centre: the first place he visited in the Centre was the Self-supported living home, where past pupils who were educated in Salesian houses and sent out to society have their residence. He then visited the vocational training school (metalwork), and the CNC (Computerized Numerical Control) workplace.

Brother Marino Bois, who escorted the Rector Major as he moved through the Centre, came from Italy 40 years ago. He has been a Salesian for 50 years. Thanks to Br. Lim’s efforts, the Rector Major was able to pay close attention to what students had constructed in the metalwork department.

More than 60 young people were awaiting the Rector Major and welcomed him warmly on his arrival. He arrived after passing through the nearby oratory that is the heart of the Don Bosco training centre, near the church. There was a welcoming 'academy' and then the Rector Major celebrated Mass, followed up by a visit to the oratory which is also a rehabilitation centre.

Members of the Salesian Family at the Centre created a happy festival atmosphere consisting of dancing, singing, and playing musical instruments. Fr Ángel posed for photos with all the performing groups after their performances. Among them, a group of small youngsters who played the harmonica at a professional level. Their performance was enough to put a huge smile on Fr Ángel's face.

After the academy, Fr Ángel spontaneously gave a small gift to the young people and others in the church. He played the guitar and sang a song with all the people there. As Fr Ángel said, that moment was like a mosaic. He addressed this fact in his homily during Mass after the academy: “I saw a wonderful mosaic in the Church of Penance and Atonement in Imjingak. Then, I see that every single moment and place I meet here in Korea during this visit comes together to make a beautiful mosaic.”

“I truly believe that our Father Don Bosco is there in your hearts now, and He is acting upon you. Above all, I am very touched by all the efforts you make that are fully Gospel-inspired.”

Later, Fr Ángel visited the Salesian community at the Don Bosco Centre and gave a goodnight to the community, especially Salesian candidates (aspirants) and pre-novices recently discharged from Military duty, and gave a blessing for the future of the Korean province.