South Korea – A family day for the Rector Major, with all the Salesians 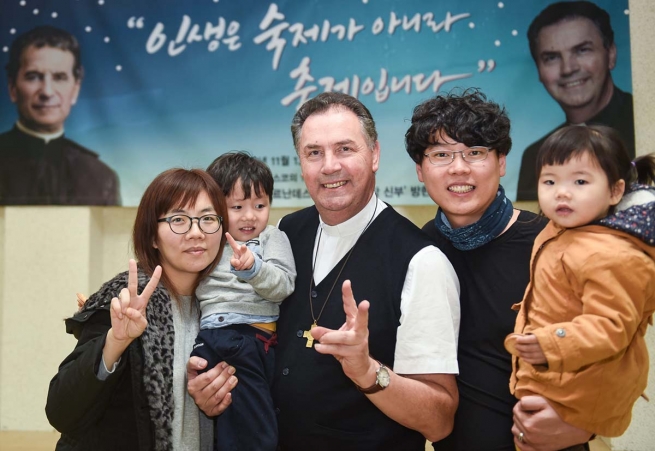 (ANS – Nae-ri) – Early in the morning of the third day of the Rector Major's visit to South Korea (November 15), the vehicle carrying the Rector Major left the Seoul Provincial house to head for the Nae-ri Salesian novitiate community, which is located on the western coast of South Korea.

As is well-known to the Salesian Family who have read the Rector Major's vocation story, Fr Ángel’s father was a fisherman in a seaside village in Spain. During his childhood, Fr Ángel lived a fisherman’s life for at least six years.

The Salesian Korean province hatched an entertaining plan from the beginning of the preparation for the Rector Major’s visit, which is “The Salesian Fisher's day”. There are many de-facto professional fishermen in the Korean province, including the Provincial, Fr Stefano Yang, the Vice Provincial, Fr Marcello Baek, and the Novice master, Fr Timothy Choi. At least another 20 Salesians love fishing.

As the Rector Major arrived at a small port marina, twenty Salesian anglers greeted him enthusiastically and they took a small boat and then headed out to sea. The Rector Major recalled his childhood: “My hometown was very similar to this place. My father used to have a small boat that resembled the boat we are taking.” It seemed that the sea, sky and sun viewed from the rocking boat was inducing homesickness in the Rector Major!

Despite proficient use of rod and tackle over a three-hour period, the Rector Major failed to land one. He signalled a nibble on several occasions, but… the last one was quite a big fish, yet he could not reel it in and in the end it was gone. Meanwhile, his Salesian companions in the boat did land some fish - just enough to bring to the dinner table. Sadly, the fishing fell short overall but the Salesians, who are more enthusiastic at fishing people than fish, and who are more interested in saving people’s souls, especially of the young, went back to shore with hearts full of gratitude.

Fr Ángel said that the morning's fishing was a truly a nostalgia moment that he might have forgotten. In the meanwhile, he emphasised that the meeting they were about to hold was the most important moment, and he initiated the “Korean Salesian Grand Summit”: "Worldwide, there are approx 14,400 Salesians. Since I became Rector Major, I’ve met approx 10,600 of them. I also plan to increase that to 12,500 Salesians by the end of next year and that would be one of most important missions for me as the Rector Major," he said. Korea is the 82nd country he has visited so far. The primary reason for his visit to Korea is not to see and be amazed by the well-constructed Salesian houses and buildings but to meet his confreres here in person, he indicated.

The Rector Major shared with his Korean Salesian confreres the current issues that Salesians confront and are challenged by throughout the world. It was a frank and sincere exchange. Despite the many things that may have come from our defects, there is still great hope for the Salesian worldwide community, he emphasised.

The photos of the visit are available at ANSFlickr.