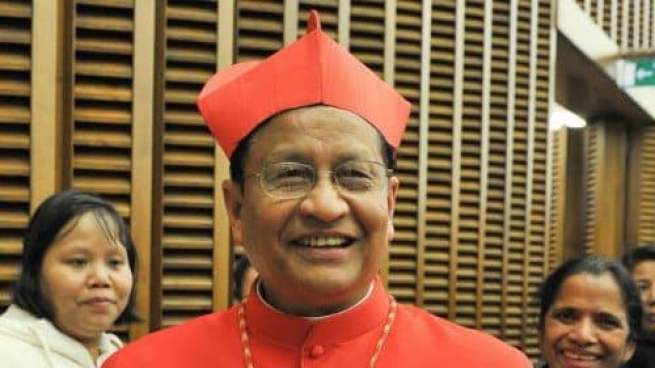 (ANS - Yangon) - Salesian Cardinal Charles Maung Bo, SDB, Archbishop of Yangon, Myanmar, was elected new President of the Federation of Episcopal Conferences of Asia (FABC), during the FABC Conference held in Bangkok, Thailand, on 16-17 November. Starting next January 1st, he will succeed Cardinal Oswald Gracias, archbishop of Mumbai, India, who completes his second term on December 31, 2018.

Cardinal Bo became the first cardinal of Myanmar on February 14, 2015, when he received the purple cap and cardinal ring from Pope Francis, in the consistory he presided over in St. Peter's Basilica in Rome.

In this way, Cardinal Bo was able to bring his personal experience as a man of dialogue and mediation and the pastoral concerns of the Church of Myanmar at the heart of the Catholic Church.

The Church in Myanmar, which recently celebrated the fifth centenary of its existence, has gone through, together with all the country's people, decades of brutal domination under a rigid military junta. Today the nation is slowly moving towards a controlled democracy.

The Salesian cardinal has repeatedly stated that his goal as a cardinal is to work for peace and reconciliation between the various religious groups present in Myanmar, particularly in a phase that sees an increase in nationalism and intolerance towards religious minorities - of which the Rohingya Muslim minority is among the first affected.

For his part, Cardinal Bo has repeatedly denounced the problems of his nation and in every circumstance has made heartfelt appeals for peace and harmony.

At the same time, Cardinal Bo is the reference point for the small Catholic flock in the country: about 800,000 faithful in a country of about 51 million people. In this capacity, for many years he has presided over the celebrations held during the National Marian Festival at the National Shrine of Nyaunglebin, dedicated to Our Lady of Lourdes, and which always gather many thousands of faithful.

At the news of the election as President of the FABC, the Salesian said he hoped this new assignment would give greater credibility to his commitment to reconciliation in the eyes of the government, the international community and the entire population.