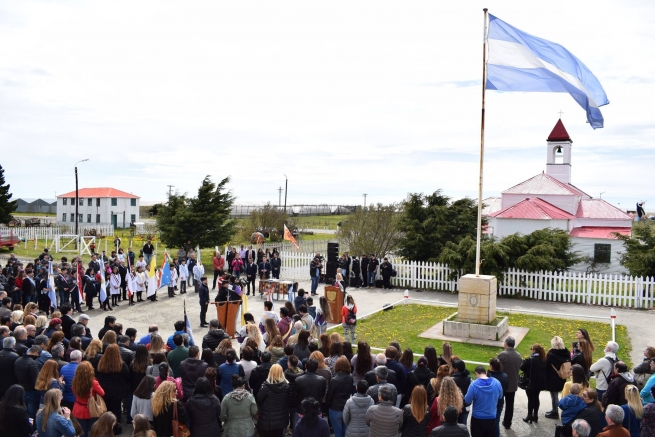 (ANS - Río Grande) – On Sunday 11 November, the 125th anniversary of the Salesian presence in the Iterra del Fuego was celebrated at the Salesian Mission of Río Grande. For the occasion, a celebratory event was held, attended by various public authorities, featuring the re-opening of the historic chapel of the land's first missionaries.

During the public ceremony, Senator Miriam Boyadjian gave the mission a Diploma of Honor of the Senate of the Republic, in recognition of the important educational work carried out in the province. "It is necessary to acknowledge these pioneers who, led by Msgr Giuseppe Fagnano, came 125 years ago in these inhospitable lands, to evangelize and educate the population. The Salesian Mission is at the origins of Río Grande, which is why it is part of our identity," she said.

For her part, the governor of the province of Tierra del Fuego, Antarctica and the islands of the South Atlantic, Rosana Bertone, present with much of her junta, commented that "Don Bosco dreamed of this land and the work of the Salesians was fundamental for the Tierra del Fuego."

The governor also underlined the importance of Salesians for the growth of the community: "They were central also in the process of building a local identity", and added that "the Salesian spirit in our region must serve to transmit to the young a service of attention to one's neighbor and their needs, always in search of the common good."

Both women also took part in the Eucharist celebrated in the historic chapel, recently restored on the initiative of the "Total" company, the Electric Cooperative and the Local Detention Unit.

"It is a matter of pride to be able today to be inside this historic chapel, where so many Salesians have worked for the Mission, but also for the city," declared the mayor of the city, Gustavo Melella. "Today is a day of celebration for everyone. It is the historical building of the city, the oldest, and represents the commitment of the missionaries, the start of Salesian work, and therefore has to do with education, with social inclusion, with resourcefulness ... Truth is that it means a lot to the city."

Finally, the Provincial of Southern Argentina, Fr Honorio Caucamán, in a letter written for the anniversary, shared a message of gratitude for all that happened in these 125 years and also recalled: "the word 'thank you' refers us to the 'Grace', to the experience of God's Love that is given, 'without expecting anything in return' ... THANKS is to know that we were and are family. And in the family there are no merits, but we welcome and give of ourselves, we are reconciled and we are supported ... THANK YOU because what we live is not improvised, but it is built on a daily basis."