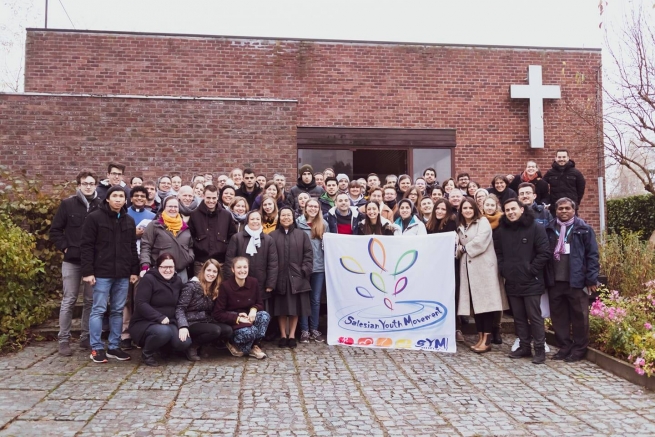 (ANS - Brussels) - From 23 to 25 November 2018, the XV General Assembly of the Salesian Youth Movement (SYM) Europe was held in Brussels, Belgium. Over 70 participants, including young people, Salesians of Don Bosco (SDB) and Daughters of Mary Help of Christians (FMA), from 19 European countries, were welcomed by the FMA community of the "Internat Don Bosco" in Ganshoren, Brussels, and by young people of SYM France - South Belgium, for this appointment that has been held regularly for fifteen years at the end of November, every time in a different European country. The themes of the Synod on "Youth, Faith and Vocational Discernment" and of European integration, between challenges and opportunities, have been the focus of this year's Assembly.

About 30 participants arrived in Brussels a day before in order to take advantage, on the morning of Friday 23 November, of the possibility of a guided tour of the European Parliament and the headquarters of COMECE, the representative office of the Episcopal Conferences of the member countries of the European Union at the institutions of the latter organization. These guided tours were organized by SYM Europe in synergy with "Don Bosco International", the representative office of the Salesians of Don Bosco at the European institutions.

Offered on the evening of Friday 23rd, once all participants had arrived, was the testimony of Markéta Imlaufová, a young woman involved in Salesian youth ministry in the Czech Republic, who in March 2018 participated, together with 300 other young people from all over the world, in the Pre-Synodal Reunion held in Rome by Pope Francis. Her testimony then introduced the theme of the XV Ordinary Assembly of the Synod of Bishops, which ended on October 28th.

On Saturday, November 24, Fr Rossano Sala SDB, professor of Youth Ministry at the Pontifical Salesian University and Special Secretary of the Synod of 2018, presented the Final Document approved by that Assembly. "This Final Document, " explained Fr Sala,  "is not a mere document, but first of all the fruit of a spiritual experience. The Synod," he added, "is not yet complete, indeed: its implementation phase has just begun."

The young people, the Salesians and the FMA present in Brussels then worked in groups, starting from the conference of Fr Sala. They identified three priorities for the future of SYM Europe: formation for all, young animators included, for spiritual accompaniment and discernment; sharing of existing good practices in this field; and the need to meet young people where and in the places they seek the meaning and truth of their lives, including the digital world.

This year's Assembly also represented an opportunity for the renewal of the Small Team, i.e., the group of young leaders called to animate SYM Europe, supported by the SDB Dicastery and the FMA for Youth Ministry. Anne-Florence Perras (France), Blazka Merkac (Slovenia) and Carina Baumgartner (Austria) completed their service, and elected for the next three-year term (2018-2021) were: Pablo Osorio (Spain), Jeanine Balzan Engerer (Malta) and Marta Radić (Croatia).

Lastly, on Sunday, the SYM Europe Assembly received a visit from Fr Olivier Poquillon OP, Secretary General of COMECE, for a dialogue on the challenges and opportunities of European integration, and the role that the Church and youth movements can play in this context. From the challenges of demography and democratic participation, to those of digital innovation and migration, there are many possible fields of engagement for young people involved in SYM in Europe.

The common desire of young people, SDB and FMA, is to "synod", that is, do the road together, in unison.