Italy - All together for the cause of Mamma Margherita 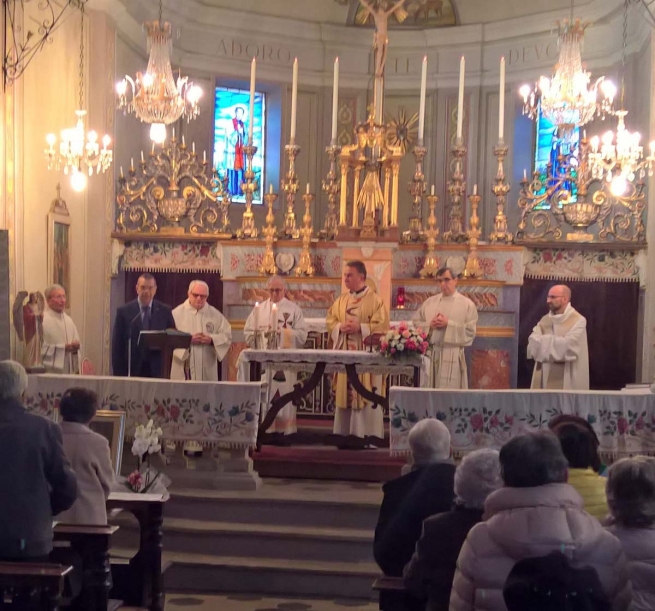 (ANS - Capriglio) – On Sunday 25 November, on the occasion of the 162nd anniversary of the death of Margherita Occhiena - "Mamma Margherita" - many members of the Salesian Family gathered in Capriglio, birthplace of the Venerable mother of Don Bosco, to participate in a solemn Eucharist. The event was an opportunity to reaffirm the commitment to support, through prayer, the cause of beatification.

In the homily, Fr Errico first recalled the figure of Christ King, whose liturgical solemnity recurred, and he then examined the image of Mamma Margherita: a mother who, like all mothers, wishes to see her children busy building their own happiness.

After deepening the comparison between Christ the King, who delivers Himself to Pilate for the fulfillment of His mission, and Mamma Margherita, engaged in the education of children next to Don Bosco, stressed that the task of educators is to direct the young people towards making their authentic, decisive and important choices of life.

He concluded by inviting them to ask for the intercession of Mamma Margherita: "Do we have concerns in our hearts? Let's introduce them to Mamma Margherita. Have we heard of a sick boy? Let's entrust him to Mamma Margherita. But let us not do it alone, but rather in small groups, because the prayer of a group of people, which is the experience of prayer of the Church, truly touches the heart of God and opens us to the reception of new miracles."

At the end of the Mass, Diego Occhiena, President of the "Friends of the Mamma Margherita" Association, noted that asking for the intercession of Don Bosco's mother also means "praying like her and with her, taking on or assuming her feelings, choices and lifestyle."

Finally he recalled some suggestions that emerged at the Seminar on Salesian Holiness held in Rome last April, and concluded: "This is the meaning of today's meeting and of the presence of so many religious realities: all together for the cause of Mother Margherita. And instead of asking: 'When will they make her holy?' Ask yourselves: 'when do we pray for the holiness of Mother Margherita?'"