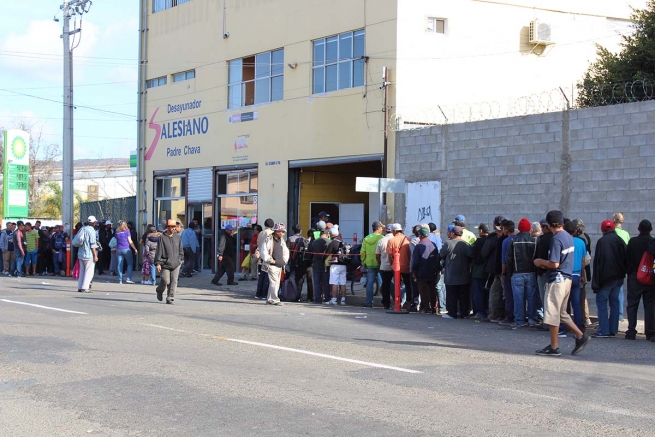 (ANS - Tijuana) - "Tijuana is a city of migrants", as one of two inhabitants was not born in the city, according to data from the National Council of the Population of Mexico. But why are we witnessing phenomena of hostility and xenophobia regarding the caravan of migrants? Undoubtedly this attitude in the border town is something new. Despite this situation, Salesians accompany Honduran migrants through their "Padre Chava" refectory.

In recent weeks Mexico has returned to the headlines worldwide thanks to a new human exodus, this time of Central American migrants, especially Hondurans, who are part of the so-called "migrant caravan" - which, in truth, is formed by several groups traveling on foot or by other means available to them. They crossed the southern border of Mexico without too much trouble, then crossed several cities and now they are gathering in Tijuana, where there are already about five thousand.

On their journey they were supported by locals and by the Mexican authorities, but there were also demonstrations of rejection. "They say Hondurans could increase insecurity and violence in the city," the British BBC TV reported.

For its part, the Salesian refectory's work continues its mission in favor of those who need help, especially at a time when nobody else is willing to assist them. Usually the center provides meals to around 1,200 people, but at this moment around 2,000 people are being served breakfast.

These thousands of people are seeking asylum in the United States, an opportunity they will most probably be denied, why so many look for a way to stay in Mexico.

An opportunity to find a job is being offered by the National Employment Service, which in fact has set up a small office within the Salesian house, so as to offer some opportunities for temporary, decent and honest work to these people.

The National Institute for Migration has also installed a support center at the Salesian Project in Tijuana, which issues documents that allow migrants to remain legally in the country.