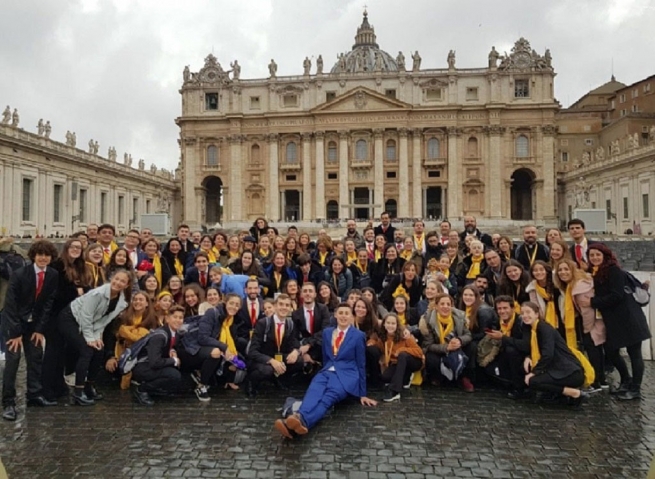 (ANS - Vatican City) - From November 23rd to 25th, on the occasion of the feast of Saint Cecilia, Patron of music and musicians, the 3rd International Meeting of Chorales took place in the Vatican, organized by the "Nova Opera Onlus" association in collaboration with the Pontifical Council for the Promotion of the New Evangelization. Remembering the importance always attributed to music by their founder, St. John Bosco, the Salesians could not miss such an appointment. Among those melodious voices was, in fact, also the choir of the Salesian Youth Movement of Spain.

This choir is mainly composed of a large number of singers from the Salesian house in Cadiz, coordinated by Salesian Rafa Sánchez Cazorla. For choir members, participation in the meeting at the Vatican was a source of real joy, as they had the opportunity to be received in audience by Pope Francis and to share the beauty of sacred and liturgical music with the choir of the Diocese of Rome, led by Msgr. Marco Frisina, in the great concert that gathered all the chorales in a single polyphonic choir, performed in honor of St. Cecilia in the Paul VI Hall.

In the special audience granted by the Pope on Saturday, November 24, the Pontiff said: "Your music and your singing are a true instrument of evangelization, to the extent that you bear witness of the depth of the Word of God and you permit a celebration of the sacraments that makes one perceive the beauty of Paradise." He also underlined how the recent Synod on Youth emphasized the importance of music as a pastoral resource, and he invited the choirs not to fall into the "temptation of protagonism", exhorting them instead to participate in the animation not only of Masses, but also of patronal feasts, processions, dances and religious songs.

For the members of the choir of the Salesian Youth Movement, as for all the participants, it was an unforgettable moment and a profound Christian experience, full of joy, prayer and communion before the Lord.

It should also be noted that on Saturday 24th the members of the Spanish SYM Choir had the opportunity to celebrate the Eucharist together with the Rector Major, Fr Ángel Fernández Artime, in a meeting filled with Salesian spirituality.