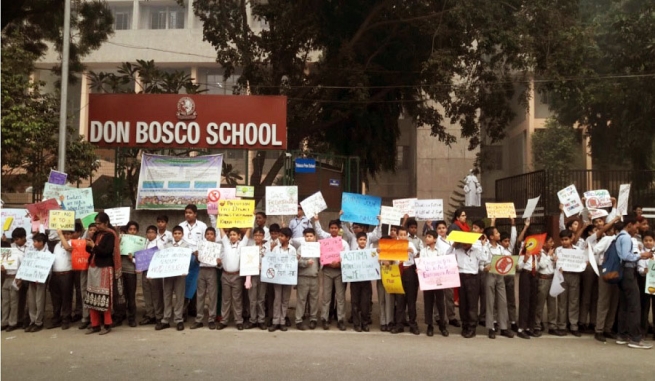 (ANS – New Delhi) – Showcasing the initiative taken by Don Bosco School Alaknanda, in New Delhi, getting twelve Catholic Schools in the Country's capital pledge for a cracker-less and pollution free Diwali this year, the Office for Education and Culture of the Catholic Bishops' Conference of India, has reached out to its thousands of schools across the country to opt for a similar decision in celebrating Diwali.

With smoggy clouds engulfing the city, Delhi has witnessed an uphill ride in terms of quality of air. Pollution has taken a toll on residents. As the festive season of Diwali approached, it was naturally assumed that things would get worse. Ergo, as part of the Health and Physician Education – Social Empowerment and Work in Action activity, the class 12-D of the Don Bosco School Alaknanda took the initiative to spread awareness about the importance of Green Diwali and why bursting crackers might just be the last straw in polluting the environment.

The awareness campaign included a morning assembly organized in the school, and a silent procession undertaken by the students of class 6 to 12, both of these activities run on the first day of the month. To organize such an event, the class was divided into 4 groups with different tasks assigned to each group, namely- the Art Group, the Placards group, the Pledge group and the Speeches Group. This created a great awareness to celebrate the spirit of Diwali.

Fr. Joseph Manipadam, SDB, Secretary CBCI Office for Education and Culture has said: “More than 20,000 students from the leading 12 catholic schools in the national capital have courageously taken the initiative that they prefer to enjoy less this year by way of bursting crackers in order to save the children and the elderly from lung disorders and gift them a longer span of life”. It was a small sacrifice to show love and compassion to the people of our own country. The joy and satisfaction in sacrificing a short lived and temporary enjoyment was far more rewarding as it was for the welfare and good health of the vulnerable section of the society.

This is true love for the country, this is true nationalism and patriotism at its best, as Mother Teresa said: ''We must love until it hurts''.