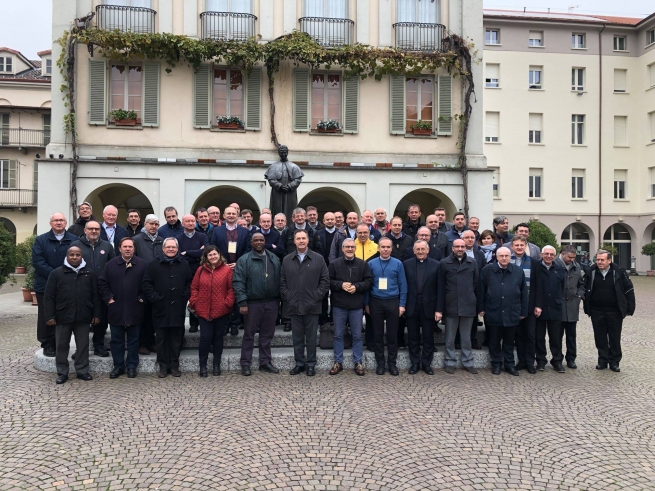 (ANS - Turin) - From 30 November to 2 December, the VII Meeting of Salesian Provincials of Europe was held in Turin-Valdocco. Two years after the previous appointment, about 60 Salesians and 15 lay collaborators in the mission, led by the Rector Major and members of his Council, met together to evaluate challenges and opportunities for the charism of Don Bosco in the Old Continent.

In the opening speech, the Rector Major, Fr Ángel Fernández Artime, underlined the significance of the value of communion and the desire to work in a spirit of synodality. He then indicated the three fundamental themes of the meeting: the challenge of immigration, formation in Europe and the joint journey of Salesians and lay persons.

The first theme was addressed by Fr Luis Okulik, Secretary of the Social Affairs Commission of the Council of European Episcopal Conferences, who showed how Europe's inability to welcome and protect refugees and migrants in a united manner represents a signal of the continent's cultural crisis. He also shared some indicative data, including: 30,000 Unaccompanied Foreign Minors arrive every year in Europe; the need for 800 thousand migrants for the German economy; the Pope's direct commitment to countering the trafficking network of human beings.

The theme of the Salesian-lay joint formation was dealt with the following day. It has been reiterated that it is not an option, but a necessary path for effectively transmitting the Salesian charism to younger generations. In this sense, the model developed at the Salesian Regional Formation Center in Quito, Ecuador was also examined as a good practice. The perspective now is to create a mixed commission able to develop a pilot project for joint formation at the European level.

The day of Saturday also included the reflections of Fr Andrea Bozzolo and Fr Rossano Sala on the recent Synod of Bishops on young people, where both took part.

Lastly, on Sunday, the focus was on the reconfiguration of Salesian formation in Europe. Fr Ivo Coelho, General Councilor for Formation, illustrated how the new European Salesian reality must face the challenges of multiculturalism and formation houses with fewer numbers than in the past. At the same time, the arrival of new missionaries from other countries, the growth in perseverance among the novices, and the forthcoming opening in Barcelona of a specific formation center for European Salesian Brothers are grounds for encouragement.

After an in-depth discussion of the role of "Don Bosco International" as the main instrument for the representation of Salesian instances in European public places, the Rector Major concluded the working session by addressing the Provincials present: "I need your vision, your courage. and your energy!"