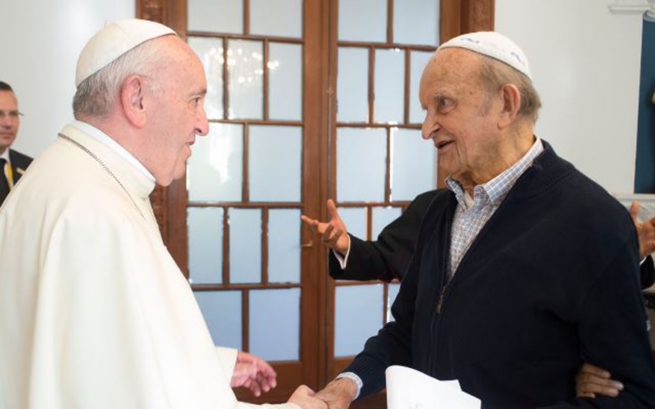 (ANS - Lima) - In the early hours of December 3 morning, the news began to spread of the death of a great Salesian, a man of God, who dedicated his whole life to the young: Fr Ugo de Censi Scarafoni, for all, simply, "don Ugo". His intense life, sacrificed, full of affection offered and received, is an example that has influenced the life choices of many young people. He animated thousands of young people, founded centers, parishes, schools, workshops, hospitals, shelters, institutes, seminaries, a monastery ... But above all, he worried about the poor, the young in difficulty. At the age of 94 he reached the House of the Father.

Fr Ugo was born on January 26, 1924, in Polaggia, a village in the province of Sondrio, Italy. Coming from a humble and simple family, he was educated, together with his five brothers, to love for God and neighbor, so much so that, when he was still very young, he and his brother Ferruccio decided to enter the seminary.

In 1940, when he was 16, his mother Ursula died. In 1949 he suffered bone tuberculosis, which forced him to spend a long time at the hospital of Santa Corona, in Liguria. Three years later, on March 8, 1952, he was ordained a Salesian priest and his life became a long pilgrimage of preaching the Gospel, charity and love of neighbor.

In 1955, he took up work with the boys of the Salesian Center of Arese, a home for young people in difficulty, without families and with behavioral problems. It was a fundamental step in his life, because being among those youths tempered his character.

In 1960, he was appointed spiritual assistant of the oratories of Lombardia and Emilia and, convinced that he could not work with the young in or from an office, during the holidays he gathered the catechists and led them to climb the mountains of Val Formazza, to make them study and prepare them for a vision and in a way that they would have understood only much later.

In 1966, he met Fr Pietro Melesi who, returning to Italy after ten years of his missionary stay in Brazil, told him about the difficulties encountered in his work for the poor of Mato Grosso. Fr Ugo then launched his proposal: "Why do we not help them?" It was July 8, 1967, when the first group of young missionaries left for Brazil. "It was like lighting a flame among these young people," Fr Ugo later wrote. Thus 'Operation Mato Grosso' was born."

"Don Bosco was for don Ugo a father, a friend, a teacher of charity, a guide to the great work for the benefit of the oratories," says of him Fr Umberto Bolis, SDB, who participated in the first expedition of Operation Mato Grosso. "Father Ugo did not think of any work without the oratory. Every week, on the heights of the Andes of Huaraz, he gathered over 20,000 teenagers and young people to talk to them about God, Mary Help of Christians and Don Bosco."

"The flame of charity that burned on the Cordillera Blanca of the Andes has been extinguished," comments Fr Bolis, "but that flame will continue to burn in the thousands of young people he has formed."