Paraguay - Thousands of young on pilgrimage to Caacupé, their motto: "To bear much fruit" 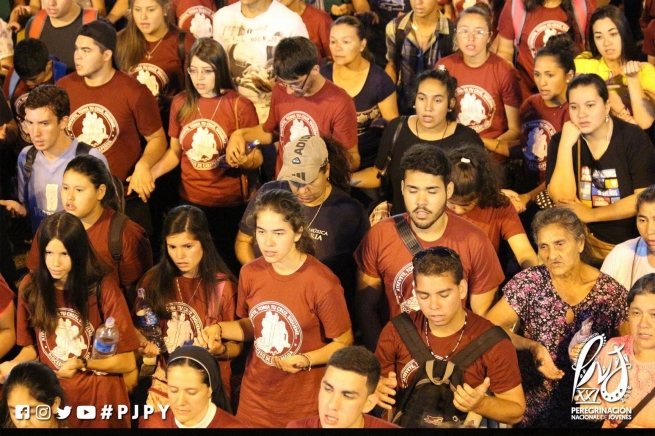 (ANS - Caacupé) - Like every year, a few days before December 8th, hundreds of thousands of Paraguayans from all corners of the country make their pilgrimage to the Sanctuary of Caacupé. Among the walkers and pilgrims there are hundreds of young people of the Salesian Youth Movement (SYM).

The pilgrimage of thousands of people are also joined by hundreds of young people who want to take this walk with the sole purpose of showing their love to the Virgin, moved as they are by faith. Starting from the legend of the indigenous José and his way of thanking Our Lady for a miracle received, this spiritual tradition was born, one which every year mobilizes hundreds of thousands of people who travel several kilometers to thank the Virgin of Caacupé for the good things that happened during the year and to ask for her protection and her support for the following year.

"Caacupé is not just a place, it is also a sentiment. It is the most complete example of the devotion and faith of the majority of Paraguayans, who gather every year at the 'spiritual capital' of Paraguay," one of the participants explained.

For this reason, from the first hours of Saturday, 1 December, thousands of young people of the SYM, together with animators, leaders and Salesians of different houses, gathered at Ypacaraí to participate in the traditional national pilgrimage to Caacupé, which this year had as its motto: "To bear much fruit."

From 9.00 am until after lunch the young people shared songs, animation and catechesis. Then, at 16:00, they began the 9-kilometer pilgrimage to the esplanade of the Basilica of Caacupé. Finally, at 7.00 pm the Eucharistic celebration presided by Msgr. Pedro Jubinville, especially dedicated to the participants of the "XXI National Youth Pilgrimage."

At the end of the celebration, the young people denounced, through a manifesto they undersigned, the lack of opportunities in accessing decent work, as well as the increase in drug trafficking and violence in the country. They also demanded quality education that reaches everyone and excludes no one.

"We invite all young people to be protagonists of this time. We want courageous young people to take to the field and play cleanly, giving their all for a better country; young people who are not silent in the face of injustice, who are not complicit in irregularities, who express what worries them and touches them, who participate actively and permanently in the service of the country and its community" states part of the manifesto read at the end of Mass.