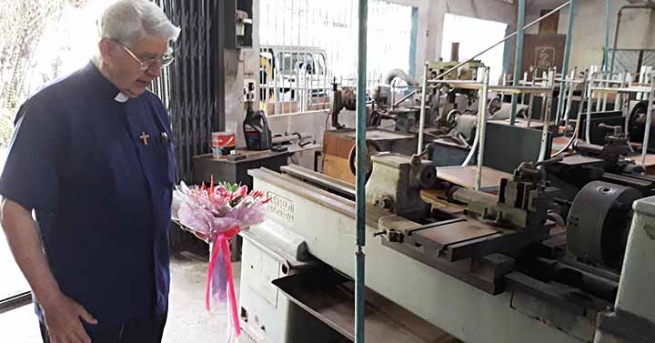 (ANS - Ronphiboon) - The diocese of Surat Thani has always been a mission territory and it is now preparing to celebrate the 50th anniversary of its foundation. Here there are five Salesian missionaries, including Fr Lorenzo Rossignolo, founder and director of the "Don Bosco Development Center", near Ronphiboon.

The late Fr Adriano Bregolin, Vicar of the Rector Major, used to ask: "How's Father Renzo?"
Fr Rossignolo, this legendary missionary of the Italian Veneto region, arrived in Thailand in 1983 and from that moment on he spent most of his time in the diocese of Surat Thani. He is well-known and much appreciated for having always borne witness to poverty, for the joy with which he accepts sacrifice and for the practices used to educate people suffering from Hansen's illness and their families.

And despite the difficulties of age, he continues to perform his duties as educator, pastor and director of the center without ever complaining.

Sixty people are currently working at the Don Bosco Development Center, some of whom are still suffering from the consequences of Hansen's disease (or leprosy, as it is commonly called). Numerous projects are being carried out in: tailoring/dressmaking, welding, carpentry, mechanics, as well as agricultural projects.

The center is well connected to the local society and also welcomes students from nearby schools.
Past pupils who have now become teachers and the Daughters of Charity of St. Vincent de Paul are its closest collaborators.

Every week, Fr Rossignolo celebrates Mass both at the "St Domenico Savio" parish of Ronphiboon and in the Phatthalung parish. It should not be forgotten that we are talking about the South of Thailand, where the percentage of Catholics is 0.1%, i.e., about 7,000 faithful compared to the 10 million inhabitants of the diocese of Surat Thani.

Moreover, whether during work in the center or while in his residence, Fr Rossignolo spends his time praying, reading and reflecting. Thanks to his example, some young people are indeed inspired to follow Jesus more closely.

In the end, to answer the question that Fr Bregolin used to ask, Fr Rossignolo is well and at the age of 76 he continues to inspire many young Salesians, encouraging them to follow the missionary vocation.