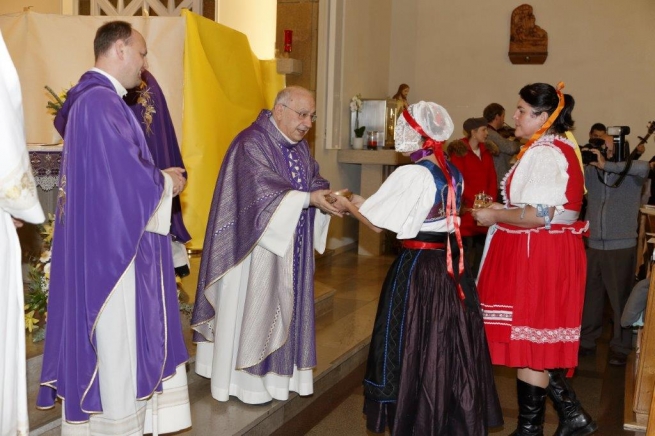 (ANS - Zurich) – On December 5, in light of the motto "Remembering to better operate", the Italian Catholic Mission celebrated the 120th anniversary of its foundation, which was thanks to the social and pastoral intuition and solicitude of the Salesian - first a collaborator and then Successor of Don Bosco – the Blessed Fr Michele Rua.

In the Eucharistic concelebration the concept was emphasized through the message sent by the pastor of the diocese, Msgr. Vitus Huonder: "Since 1860, Zurich has had to deal with an ever-increasing number of migrants coming from Italy and this led to the establishment of the Italian Catholic Mission in 1898 ... The celebrations of the 120 years are a welcome opportunity to express my feeling of gratitude to the Lord for all the material and spiritual good that has been done to the numerous faithful immigrants from Italy throughout the years through the Salesian community."

The telegram of greetings with apostolic blessings from Pope Francis was then read, as was, during a festive ceremony in the theater, the message sent by the Rector Major, Fr Ángel Fernández Artime. He praised the opportunity of this feast, which is also a duty of reflection for the future, "so that," he wrote, "the memory of so many Sons of Don Bosco and their efforts, of the many testimonies and of the many sacrifices accomplished at the service of faith, the education of young people and of emigration, are not lost."

The Rector Major accompanied the message before the gift of a historical painting by Fr Rua, dating back to 1889, and thus far preserved in Turin-Valdocco, and was unveiled by the Consul General of Italy, Giulio Alaimo.

Among the participants there were Italian immigrants of first, second, third generation; Italian-Swiss pensioners; young people already born and raised in Switzerland and others recent residents; also, there were two large groups of Czech and Slovak emigrants, who have been part of the Italian Mission church for years, with a spirit of solidarity and mutual integration typical of Salesianism. Bearing in mind that the parish priest is Polish and his vicar is from Kosovo, it is possible to affirm that the Don Bosco parish is a sort of small "socio-religious" UN.

Much time has passed since the end of the nineteenth century when Italian immigrants were victims of discrimination and mistrust. The change took place thanks to the work of many men and organizations, including the Italian-language Catholic Mission, initiated and continued for all this time by the Salesians.