Sierra Leone - Joe will distribute your letters to street children 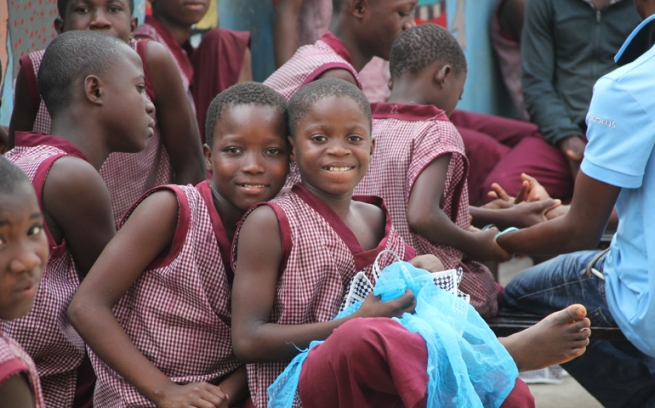 (ANS - Freetown) - A few days ago a Salesian school was invited to write letters to the girls and boys of Sierra Leone. The problem  was: but who will bring these letters and greetings? Today we'd like to introduce you to one of the postmen who will deliver the letters to the children of "Don Bosco Fambul" on your behalf. His name is Joe Conteh, and in the past he was a street kid. Today he coordinates the "Child Care Center" and is like a father to the 50 children who enter the center every nine months, to receive help with, among other things, being reunited with their families.

As it is for thousands of African boys, Joe's story begins in a very poor family. "There was not enough money at home to support us all, because we were many," he says. While suffering from poverty with his parents and siblings, he had the misfortune to make friends with other boys who ended up convincing him that he would be better off without his parents. And he ran away.

When he was already living on the street, Joe realized that life was not as beautiful as he expected. "Every day we had to fight to survive." They would manage by getting a few small jobs, by begging or stealing. They risked violence, contracted diseases, or were even arrested and sent to prison with adults.

That was his life... until he met the Salesians. "One day a person came from 'Don Bosco Fambul'. He asked me if I wanted to stay on the street or go home." Joe did not know whether to trust him, because "people from many organizations came to talk to us, but in the end they would only take a few pictures and then they left."

They came to meet him twice more, until Joe decided to visit the center. And when he saw it, he decided to stay. "At that time there were many of us, 72." In his case, it was not possible to go back to his parents. "We spent ten months there, and then we were asked if we wanted to continue studying at school or doing vocational training. Whatever we chose, they would help us for another two years." So Joe opted for vocational training. "I prepared myself for 18 months at the end of which they gave me the tools necessary to start working. I graduated on June 22, 2002," he remembers with pride.

His big dream is that street children "have a better future. Living in this country is not easy. But I tell you that being here is a great opportunity and that we need to work together to become free citizens, responsible and friends of God. Every day I pray for them."