Spain - "I count on you to change the world": Salesians of Algeciras offer 761 ideas 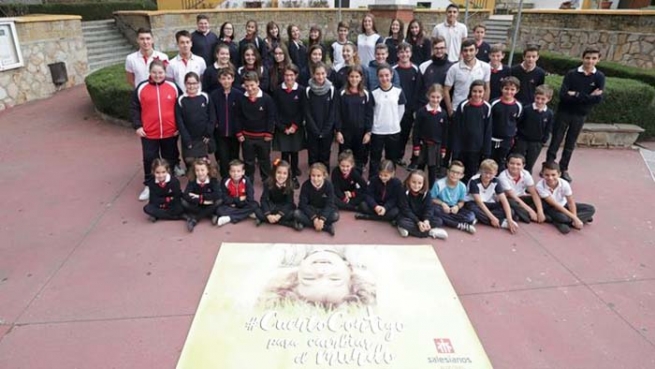 (ANS - Algeciras) - Raise your hand if you have never wanted to change the world at least once, maybe when you were young. Everybody? Exactly! Everyone has had at least an idea, an initiative to make this planet a more habitable, more humanized world. The problem is that all this is forgotten with time. The 761 students of the Salesian school in Algeciras do not want this to happen to them, and so they have joined hands - 1,522 hands - to make a book, which contains their ideas for changing the world.

"I count on you to change the world" is a volume of 200 pages, in which the students, from the secondary to upper schools, expose - through comics, poetry, prose or drama - the ideas they have worked on. The starting point for their reflections are the United Nations "Millennium Development Goals". They asked: what can we do to eradicate poverty and hunger, achieve universal primary education, promote gender equality and women's empowerment, reduce child mortality, improve maternal health, fight HIV / AIDS, malaria and other diseases, ensure environmental sustainability or develop a global coalition for development ...?

"I count on you to change the world" is the title of the book, but also the theme that accompanied the Salesian school of Algeciras throughout the 2017/18 school year.

"The students wanted to learn more profoundly about the world in which they live and from there they became more aware and committed themselves to change some practices to make it more human and sustainable," explains Ismael Bermudez, the supervising teacher.

Behind this book is all the work done in a year by the Salesian school in Algeciras, which has sought funding to publish it through a crowdfunding campaign. "We wanted girls and boys to feel that today's society needs their ideas and their values," underscores Manuel Redondo, Director of the "Mary Help of Christians" center in Algeciras.

Thus the students worked on the objectives, summarizing their reflections in the form of aphorisms, poems, reports, drawings, news and theatrical texts.

"The idea was to make students aware of how lucky they are and of the fact that they are able to generate awareness of problems at the global level. Moreover, at the individual level, they had to write each one a sentence that contained their feelings," explained Bermúdez.