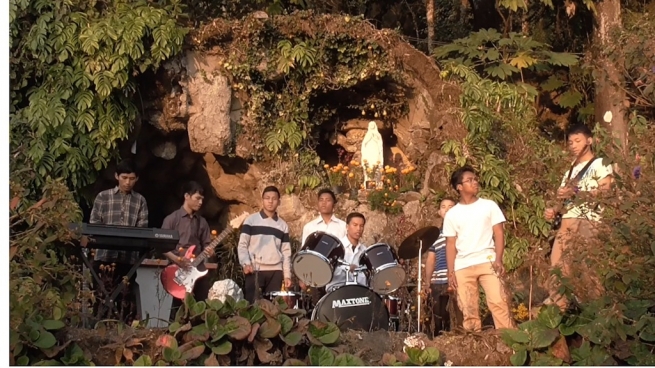 In addition to the group of the Salesian College Sonada, three groups of the "Salesian College Brother", diocesan and brothers of the Calcutta Province and the regions of North-East India also participated.

"This year, in addition to the certificates and the cash prizes obtained thanks to the generous sponsorship of the 'Glenary Restaurant Darjeeling' and the 'Church Art Kolkata', we also offer trophies to the winners," said the director of Radio Salesian 90.8, Fr CM Paul.

The radio program coordinator, RJ Samir Chhetri, explained: "The competition consists of the creation of an original Christmas song, in Nepali or English, by a team of ten or less members, including musicians."

This year, however, there was also an important novelty compared to the past editions: the musical groups, as well as recording the songs for Radio Salesian, also performed for "Salesian Television."

The recording was later delivered to other TV channels, such as Darjeeling TV, Hamro TV Kurseong and Mirik Television.

The votes to decree the winners of this song contest began on the Facebook page of Radio Salesian last Saturday, December 22nd, and today, January 2nd, the name of the winners are to be announced.

The outcome will be published on the aforesaid Facebook page and through the Radio Salesian App "Listern2MyRadio".

To win will be the first three songs that have obtained the highest number of likes.

Thus, we have but to tune in to the above channels and, while waiting to know the winner, listen to the songs these talented youngsters have made!