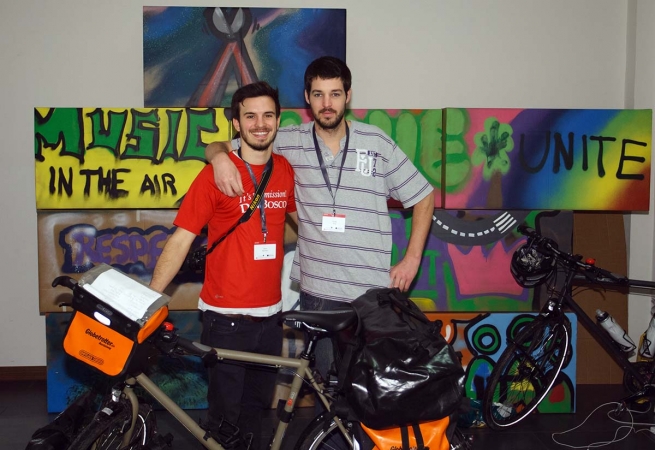 (ANS – Cologne) – On the 10th of April, Ernest Roig Campi and Jakob Steinkuhl will head towards what might just be the biggest adventures of their lives – a 15 month biking trip from Germany all the way to Vietnam. The starting point of their 15.000 km journey will be the monumental Cologne Cathedral. On their way to the other end of the world, the two qualified nurses aim to raise money for Don Bosco Straßenkinder and will visit several Don Bosco houses.

“It has always been my dream to travel around the world (…) When I met Ernest during my job training as a male nurse, I told him about my plan and he was instantly enthusiastic about the idea” explains Jakob, who spent one year as a volunteer in East-Timor, working with the Salesians of Don Bosco on a project supporting and educating orphans.

“I took care of the children and taught classes in religion and sports. During this time I found my true calling - to go into medicine. I became a qualified nurse and decided to become a doctor later. This biking trip is my way of saying thanks to the Salesians” he adds.

“I heard of the Don Bosco family from Jakob” says Ernest. “He told me a lot about his time as a Don Bosco volunteer in East Timor. His enthusiasm was infectious. I immediately liked the idea of supporting the work of Don Bosco with our trip, because the Salesians do great work all over the world.”

They are going to cross the Alps into Croatia, then they will reach Greece and Turkey. From there they will follow the coastline of the Black Sea to Georgia and then pedal to Turkmenistan and China, followed by India and Nepal, until they reach their destination: Vietnam

During the journey they will visit three projects: the first stop will be at the Don Bosco home for refugees in Istanbul. The next stop will be in Kathmandu, Nepal, where the situation is still difficult one year after the earthquake. The third and last stop will be in Ho Chi Minh City in Vietnam, where the Salesians run a hotel school for disadvantaged children and teenagers.

There are different ways in which they will support the Salesians of Don Bosco. “For one, we want to make the name Don Bosco more popular through Facebook, twitter and our website, www.pedalforhumanity.eu . Many of my friends hadn’t even heard of Don Bosco until I told them about our plans. Furthermore, we embedded a button on our website through which people can donate directly for the work of the Salesians of Don Bosco. Thus, the donations don’t go through us, but directly to Don Bosco” they say.

After this adventure they have no definite further plans but Jakob is sure that he will stay close to the world of the Salesians in some way or other. “Once you are part of the work of Don Bosco you remain part of it for ever.