Italy - "The great educator": Still like Don Bosco today, in search of souls ... on the web 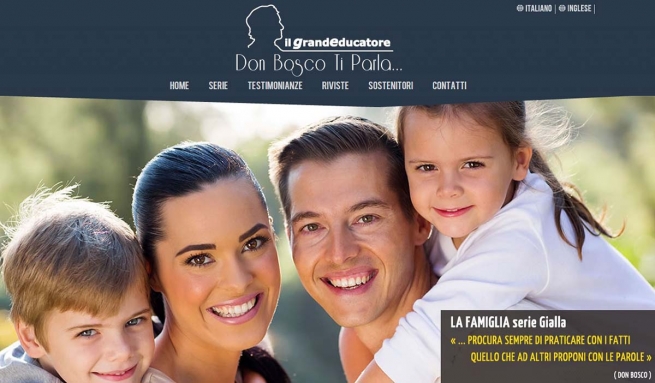 (ANS – Verona) - "Don Bosco went in search of souls; I go in search of ... e-mail to reach many people through the newsletter to help them to open their soul to salvation." So says Angelo Santi, half joking, half serious. He was a pupil of the Don Bosco Institute in Verona in the '60s. Angelo is an experienced and skilled graphic artist with the local newspaper "The Arena", with twenty years of professional experience in contact with journalists. When he retired he opened a Salesian pedagogy site. And in honour of Don Bosco could not call it anything other than... www.ilgrandeducatore.com

The site is divided into Series on topics ranging from the family to children to young couples, from spirituality to short stories, from ethical challenges to personal articles on Don Bosco and Mother Mazzarello...

From the various series about 1000 entries have been collected on cards which can be read and printed, each one dealing with a specific topic. There are plenty of pictures, some of them comic, easy to read and understand, based obviously on the Preventive System, still "unquestionably valid and current all over the world" says Angelo Santi.

This huge amount of material is drawn from Salesian publications, sites and magazines. Angelo Santi says "My task is to assemble the various contents as a good journalist, making sure that the reader, once they start reading will be curious and want to continue to the end, resulting in moral and spiritual enrichment, as Don Bosco called for."

In his work Mr. Santi is not alone, but accompanied by a skilled webmaster, a graphic designer, also a past pupil, and a couple of Salesian Cooperators as auditors of the texts; all people who work on a voluntary basis.

The site is currently available in Italian and English. It is expected that in the future it will be translated into other languages ​​and contain a new series dedicated to multimedia.