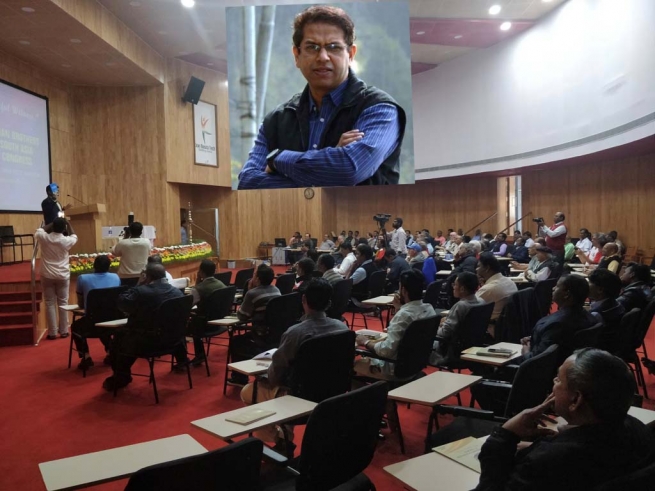 The theme of the 5-day Congress was: “Salesian, be a Faithful Witness”. A total of 130 Salesians participated in the congress, including 98 Brothers and 32 priests.

In the past two and half years, Br Puthenpurackel, with the help of Don Bosco Alumni of earlier institutions where he served, and with the help of friends and well-wishers, was able to set up a library with a large collection of academic books in English and Bengali, a computer lab with 30 computers, a 8,500 sq. ft. assembly hall area, and bring about a total transformation in the school infrastructure and academic progress.

Br Puthenpurackal does not hesitate to say, “The school that used to have failures every year in the Board Examinations has for the past two years not only had 100% of the students passing the boards, even produced a state topper from the ST category - Miss Roshni Hasda from this school. To impart skill training to senior girls along with academics, a tailoring unit with 30 machines too has been set up.”

Former Dean of Studies at Don Bosco Vidyaniketan Kalyani and Salesian College Sonada, Br Puthenpurackel believes that, “given the facilities and training, Santal tribal children can compete with their peers in any other prestigious English medium schools.”

Speaking about his plans for the Salesians Brothers of the region for the next five years, Br Puthenpurackel says that a concerted effort would be made, “to promote the vocation of the Salesian brother and make it known among priests and the faithful besides helping brothers to deepen their Identity, Visibility, and Credibility.”

The regional superior Fr Maria Arokiam Kanaga delivered the Presidential Address while Economer General Br Jean Paul Muller gave the key note address stressing “the identity of the Salesian Brother as an apostle of Christ capable of proposing relevant solutions to the various challenges faced by the youth of South Asia.”

The reflections during the Congress were facilitated by the inputs of four resource persons,  including Salesian Scripture Scholar Br Abraham M. Antony who dwelt on the theme of Salesian Brothers as personal witnesses of the Lord from a biblical perspective.

Formation Councillor Fr Ivo Coelho considered the Post-novitiate Formation of the Salesian Brother, while Psychologist Fr Edison Fernandez reflected on how to be a witness, drawing inspiration from the New Testament, the life of Don Bosco, and the Salesian tradition.

Administrator of Bosco Boys Home Borivli Fr Adolf Furtado elaborated on how to be a witness to the youth of our times and challenged each participant to come up with three innovative responses to the concerns of the young.

The zonal meetings, the province-wide interactions, the religious-profession-knowledge sharing, and the various group discussions offered all the participants ample opportunities for airing their views and contributing their share to enrich the Congress.

Brother Puthenpurackel says, “The entire Congress proceedings were characterized by a very serene, joyful and fraternal atmosphere. A good mix of both senior and junior confreres contributed to the richness of the Congress.”

The Brothers Congress concluded with a statement which listed action plans for three areas concerning Identity, Visibility, and Credibility of vocation to the Brotherhood.

Some of the plans include deepening Salesian Brother’s spiritual testimony; promotion of Brother’s vocation; and providing life sketches of famous Brothers in local languages in the coming four years.