Chile - It's never too late to be a saint 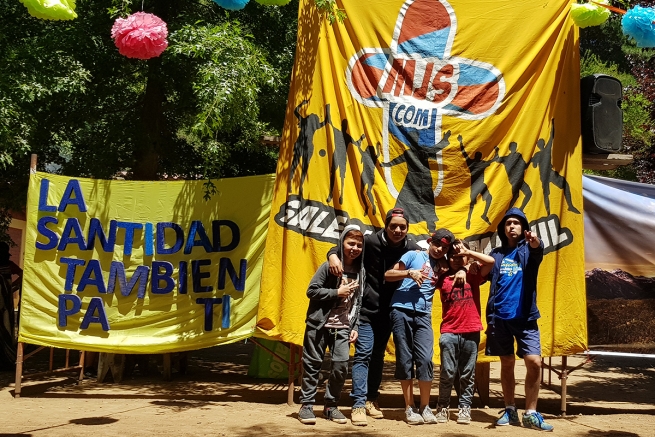 (ANS - Santiago) - Over 120 children, adolescents and young people of the Salesian Youth Movement (SYM) of the "Camilo Ortuzar Montt" Salesian Lyceum in Santiago participated in a camp-retreat at the Las Peñas house on 19-21 December to reflect on the theme of the Rector Major's 2019 Strenna: "Holiness for you, too."

This experience was necessary to consolidate the path of integration and identity of the SYM of the "Camilo Ortuzar Montt" Lyceum, which was formed in 2014 by gathering members of various groups: the "Missionary Childhood", the "Domenico Savio" clubs, the "Meeting of the Children in the Spirit", the "Salesian Apostolic Communities" and recently "The Small Children of Valdocco."

The children and young people were accompanied by adults who also experienced this oratory space of formation and recreation wherein to share a few days of youthful joy, Christian life, friendship, fresh air, recreation and sanctity.

During the work days, the participants were invited to look at the three fundamental sacraments to live holiness, that is: Baptism, to be "new men and women"; Reconciliation, to be aware that "God is with me in the struggle"; and the Eucharist, "Bread broken and shared". Moreover, on the last day, the call to be a missionary of holiness was developed: "For the world, but not of the world".

Various recreational activities took place, such as: sports, artistic and cultural workshops, walks ... accompanied by moments of prayer and meditation, following the example of Domenico Savio, who discovered at the Oratory of Valdocco that "here we make holiness consist in being very happy and doing our duty well."

At the closing Eucharist of the camp, a boy from the Missionary Childhood, was much moved emotionally, thanked everyone for the days experienced together and said to his friends: "it's never too late to be holy ...".