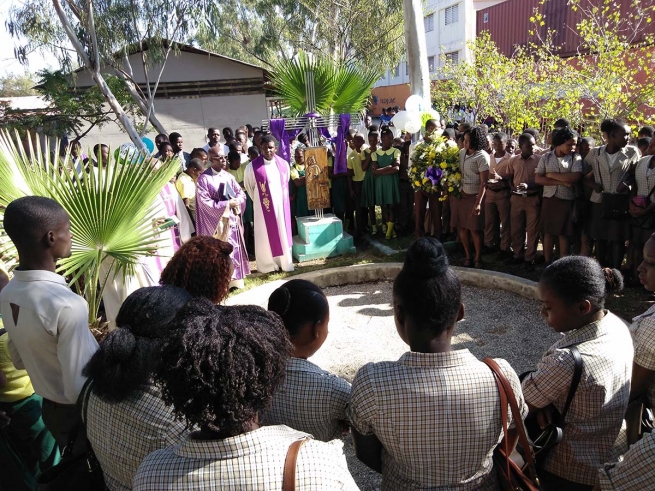 (ANS – Port-au-Prince) – On 12 January last, exactly 9 years after the earthquake that shook Haiti, a Eucharistic celebration took place at the National School of Arts and Trades (ENAM, in French), the first Salesian house in Haiti. This ceremony, at which Fr Morachel Bonhomme, the Vice Provincial, presided, brought together a great number of Salesians, Daughters of Mary Help of Christians, postnovices, prenovices, rectos, and teachers of the “Work of the Little Schools of Father Bonen” and students from the Salesian Normal School.

In his homily at the Mass, Fr Bonhomme explained to his listeners the importance of the spiritual life for every individual who professes to be a Christian. He then commented especially on the Gospel chosen for the occasion: Jesus and the death of his friend Lazarus. He thus recalled the dialogue between Jesus and Martha which begins with the woman’s profession of faith – “Lord, had you been here, my brother would not have died! But even now I know that you will ask God for something and he will grant it to you” – and it concludes with Jesus’ promise: “I am the resurrection and the life; whoever believes in me, even if he dies, will live”.

The Vice Provincial then went on to explain to the faithful gathered there that we need to always be ready to encounter the Lord and that all of human existence belongs to God.

This celebration brought many memories to light for those present, and they remembered the many students who died in the earthquake, as well as the three victims from among the spiritual sons of Don Bosco, Salesian Brother Hubert Sanon, the first Haitian Salesian, and two young Salesians in formation.

Nine years later the Salesians in Haiti are picking up the consequences of the earthquake on 12 January 2010, and the Rinaldi Foundation, the Planning and Development Office, continue to carry out the work of coordination of funds for the communities. Furthermore, the Work of the Little Schools of Father Bohnen, situated at the centre of La Saline and Cité Soleil, two fo the largest shanty towns in Port-au-Prince, continue to serve thousands of children and young migrants, and the Salesians in Haiti, following the invitation that the then Rector Major, Fr Pascual Chávez made to them, continue working to be “makers of history, sentinels of dawn and prophets of hope”.