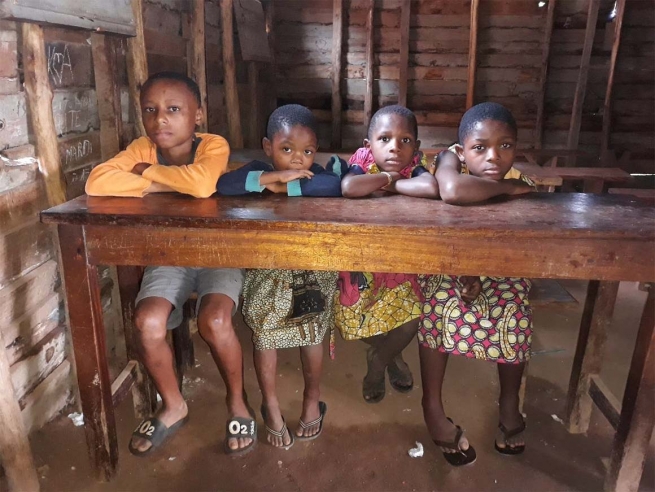 (ANS – Bukavu) – On17 August 2018 a devastating fire broke out between Irambo and Pesage roads, in the area of Nyalukemba in Bukavu. It destroyed more than 300 houses built with wooden planks and very close to one another. “I wrote to various friends in Europe, asking for help for the families who lost everything in the fire. I received a beautiful response of generosity”, comments Fr Piero Gavioli, Salesian missionary in the country for more than 35 years.

With the agreement of the diocesan Caritas, the Salesian missionary decided to help families who needed to pay school fees for their children who attend the primary school. “The leaders of the Christian communities in these districts carried out a serious survey in houses and schools, and drew up a list of children to be helped” the missionary recounts.

At Irambo, the Don Bosco Centre took in more than a hundred minors. Recently, a social worker from the Don Bosco Centre at Bukavu, Bienvenu Karume, visited the families affected by the fire and were able to see that some families had received help in materials or money from public or private bodies, and had begun to rebuild their houses. But since the authorities had not taken measures to help the inhabitants to build according to the standards of the urban planning regulations, the same errors as in the past have been repeated.

“Dad built a house out of sheet metal in which we spend the night, but in very difficult conditions, without a bed, mattress or good blankets. It is rather cold…” says Lea, a 12-year-old and sixth of nine children.

“With help received in aid-in-kind and money, my father rebuilt the house, but it is not yet finished or furnished; we are already living there but it is tough” adds Ahana Babwine, 10 years old, the eighth of ten children.

The families who have returned to their homes have to tackle many difficulties: many houses are made of tin, the rooms are not separated by solid walls and are often lacking everything. Furthermore, when it rains they are also victims of flooding because the district is on swampy ground which is not appropriate for building on.

Hence the Don Bosco Centre has preferred to invest help received in a school for the children. At least, thanks to national and international solidarity, almost all the children of the district are enrolled in school and, with the hope that comes from education, can perhaps build a better future for themselves and their families.