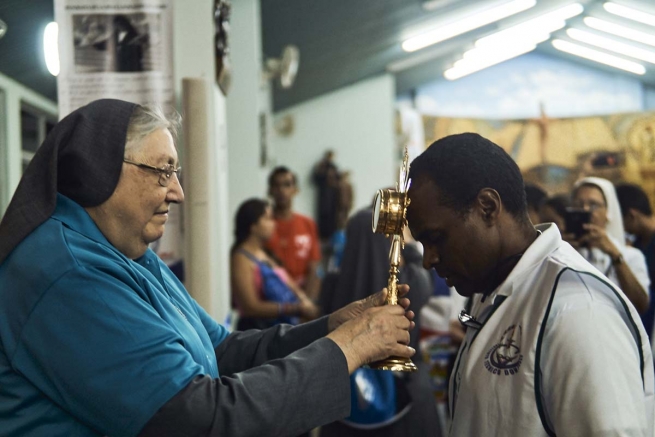 (ANS - Panama City) - In the temple of Mary Help of Christians of the "Don Bosco Technical Institute" of Panama City, the pilgrimage center of the Blessed Sister Maria Romero Meneses (1902-1977), Daughter of Mary Help of Christians, was inaugurated. She is one of the patrons of the World Youth Day (WYD) 2019. Mother Yvonne Reungoat, Mother General of the FMA, cut the ribbon to open the doors of the church to the pilgrims of WYD.

One year ago, a group of religious sisters was founded - Sister Inés Berríos, Sr. Marcela Ortiz, Sr. Celia López, Sr. Carolina Cruz, Sr. Araceli Pereira, Sr. Marianela Solís and Sr. Mayra Biches, as responsible - for the creation of the pilgrimage center. "We want this to be a pilgrimage through the life of the Blessed, so that after leaving the temple the pilgrims can see with the glasses and walk with the shoes of Sister Maria Romero," they said.

Pilgrims enter through the main door and begin a journey of encounter with the blessed Romero, a woman in love with God: her two loves - Jesus in the Blessed Sacrament and Mary Help of Christians – she called her "King" and her "Queen".

Prilgrims will live the first moment in the Marian shrine through a reflection under the sign of water. The Blessed FMA asked the Virgin for water that healed and it was granted her in the foundation of the "House of the Virgin" in Costa Rica. There are testimonies of people who drank this water with great faith and received physical and spiritual healing. For the pilgrimage center, water was taken from the same source in Costa Rica.

Continuing the journey, pilgrims reach the central nave of the temple, where there is the dream of the two columns of Don Bosco represented, and where one can reflect on the Salesian dimension. After a meeting with the Blessed Sacrament, the historical route, one arrives at the altar of the relic of the Blessed Sister Romero.

The center is already open and being visited by pilgrims since, in these days of the WYD, it hosts many young people from the Salesian world.

The exposed relic was donated by the Archbishop of Panama City, Msgr. José Domingo Ulloa, at the Technical Institute of Don Bosco, and it will remain there for public veneration.